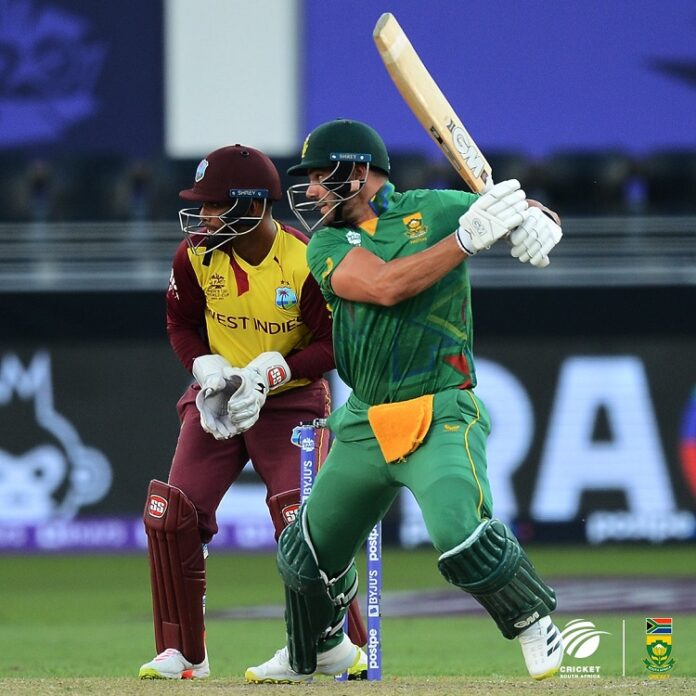 South Africa set aside the noise of off-field controversy to complete a controlled win and bring their ICC Men’s T20 World Cup 2021 campaign back on track.

After their pace bowlers restricted the West Indies at the death, South Africa’s top order were clinical in chasing down a target of 144 with eight wickets and 10 balls in hand.

While West Indies put their batting woes from the first game to rest, they still lost five wickets in the last three overs. Failing to capitalise on a quick-fire fifty by Evin Lewis, the defending champions only posted 143/8 and slipped to their second loss in a row.

South Africa will look back to the two overs bowled by Dwaine Pretorius at the death, in which he picked up 3/17, and Anrich Nortje’s 1/14 as crucial in setting up the victory.

South Africa’s chase got off to a rocky start when their captain was run out in the first over going for a quick single. Andre Russell at mid-off was quick with his pick-up and throw at the non-striker’s end. Hendricks, though, ensured the chase wasn’t derailed. Coming in as a replacement for Quinton de Kock, who controversially opted out of the match for “personal reasons”, he took on the bad balls and kept the scoreboard ticking without ever trying anything risky.

Even when South Africa went almost three overs without a boundary, the pressure remained on the West Indies to get a breakthrough. They were forced to bring in Dwayne Bravo in the eighth over, but it was Akeal Hosein, bowling his fourth over inside the first 10, who finally struck.

Shimron Hetmyer dived forward and the third umpire confirmed that he took a clean low catch at deep square to send back Hendricks for a well-made 39 off 30 balls.

Markram carried on in the same manner, targetting the final balls of the overs for boundaries to keep the required rate in control. He took leg-side sixes off both Hayden Walsh and Kieron Pollard.

When Bravo squeezed in a two-run over, he went on to ease the pressure with another shot into the stands.

With less than a run a ball needed, Markram just had time to bring up his half-century off just 25 balls, and fittingly struck the winning runs.

Earlier in the first innings, South Africa handed Markram the new ball for his part-time off-spin, and he enjoyed two good overs. Bavuma’s punt of using him against the left-handed Lewis seemed to be working, as his second over was a maiden.

However, Lewis freed his arms in the fourth over under fielding restrictions, and punished both spin and pace.

When Kagiso Rabada went wide, Lewis sent it racing past backward point for a four. When the bowler was full, Lewis’ reply went soaring over his head. When Markram was short, Lewis pulled him into the stands over midwicket; when the bowler overcompensated by going full, the ball was sent sailing over long-on.

West Indies’ concern was that Lewis did the bulk of the scoring. Even as Lendl Simmons struggled, Lewis quickly moved to his fifty with his fifth six of the afternoon, going down on his knee to slog sweep Tabraiz Shamsi.

Unfortunately for the opener and his team, his innings would end at 56. Having been smashed for six, Keshav Maharaj had his revenge in the next legal delivery. Rabada kept sight of the ball in the afternoon sun and caught Lewis just inside the ropes.

After that wicket, West Indies found it hard to build partnerships. Although several of their dangerous batters came out with intent, nobody other than Pollard was able to make a sizeable contribution.

Nicholas Pooran, who came in at No.3 instead of Chris Gayle, struck a couple of boundaries, before he became Maharaj’s second victim, caught by David Miller at long-off.

Simmons’ stay ended at a disappointing 16 off 35 balls when he was bowled by Rabada.

Gayle and Pollard threatened to up the scoring, but Pretorius struck with his first ball of the day, getting Gayle to edge behind.

South Africa denied West Indies any sixes after the 16th over. Nortje conceded just five in the 19th over and took the wicket of Andre Russell off a yorker.