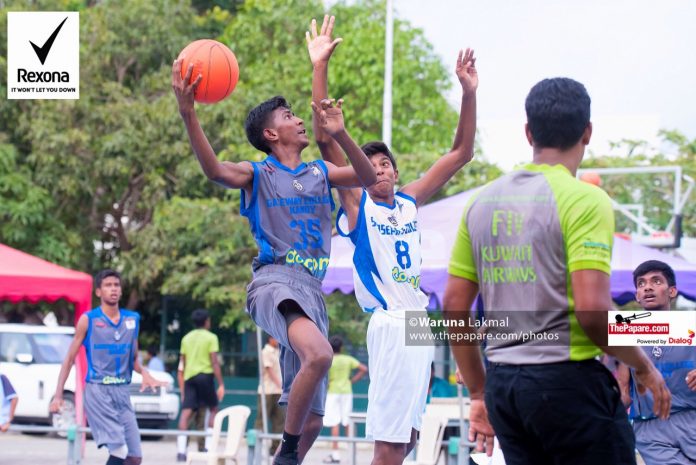 Here are the results of two games played yesterday in the All Island A Division Boys Basketball Championship between Gateway College Kandy and St. Joseph’s College, Wattala and Asain International School and Ananda College, Colombo 10.

The game tipped off with an under the basket for Gateway Kandy, however, St. Joseph’s Wattala retaliated with back to back layups but this didn’t keep Gateway Kandy from gaining an early lead.

It was a rather one-sided affair for the Gateway Kandy boys where they dominated the rebounds and made easy baskets to a get an early lead. Dineth Ulandupitiya of GCK played with ease as he managed to dribble past his defenders for easy layups.

Dineth Ulandupitiya kept up his scoring rate in the second quarter too to give GCK a sustainable margin over SJC Wattala. Dilshan helped SJC Wattala stay on in the game and put pressure on the Kandy boys.

The game moved to a fast paced situation as both teams were energetic. Dineth Ulandupitiya and Navindu Weerasinghe of GCK ran past their defenders to help GCK pull away from SJC Wattala.

As the last quarter began, St. Joseph’s Wattala tried to give a hearty fight at the start but it was the defence by the Gateway Kandy boys that managed to keep SJC Wattala at a halt and give GCK the win.

The second match of the day went in favour of Asian International School, winning by 9 points, with a final score line of 89-80. Joel Perera and Kavilan Kanthavasean were the highest scorers for Asian securing 32 and 12 points respectively for their team. Senan Godallage was the main offensive player for Ananda College scoring 20 points for his team.

Joel Perera shot an easy under the basket at the start of play to get Asian to a strong start. AIS couldn’t dominate all four quarters of the game and Ananda made it extremely hard for AIS to get past their strong defence too in the third quarter. Senan Godallage’s fast breaks and accurate free throws was not enough for the Maradana boys to outscore AIS. AIS managed a comfortable 9-point win.