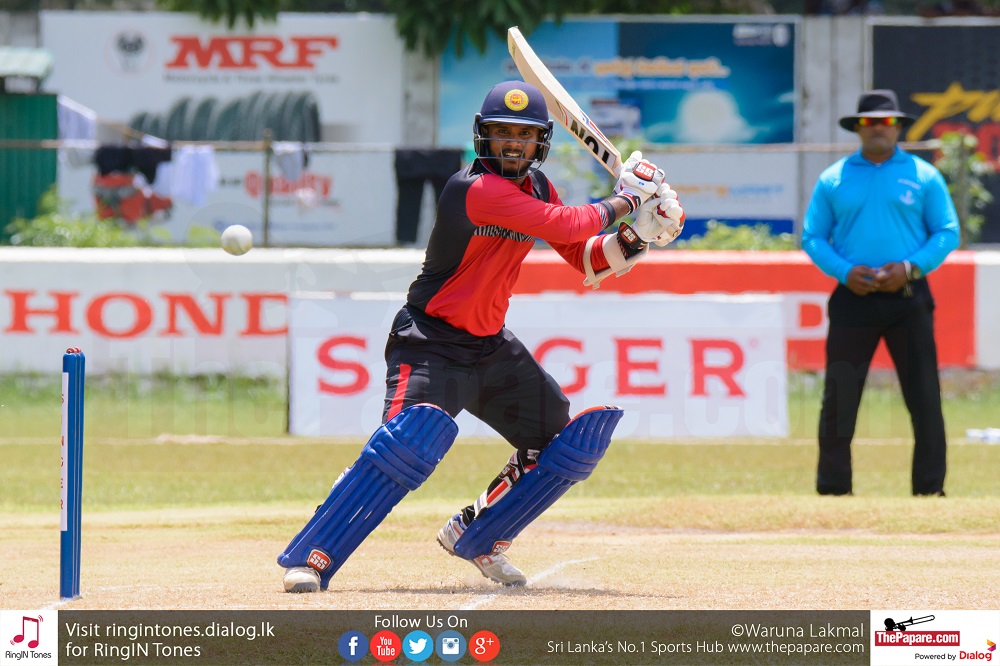 Despite the inclement weather around the country,  the 25th Singer – Mercantile Premier League is running smoothly in a highly competitive manner. Here’s a round up of the matches which took place today.

This match took place at the MCA grounds. Due to the dampness in the outfield the umpires had to reduce the match to 36 overs. Sampath Bank won the toss and elected to bat first. In-form Dilshan Munaweera opened the batting for Commercial Credit and scored a blistering 85. Apart from Munaweera the only notable contribution came from young star Wanindu Hasaranga who made 27 runs. Commercial Credit were bowled out for 182 in just 33.2 overs with Prabath Jayasuriya and Tharindu Kaushal claiming 3 wickets apiece.

From the beginning of the run chase, Sampath Bank was put under immense pressure by the Commercial Credit seamers. Lahiru Gamage and Asitha Fernando struck early with the new ball to put the breaks on the run chase. Sampath could never recover from the horrible start and they were ultimately bowled out for just 121 runs which gave Commercial Credit a comfortable win by 61 runs.

LB’s top order consisting Sadeera Samarawickrama, Kusal Mendis, Shehan Jayasuriya and Dhananjaya De Silva failed against the seam of Vikum Sanjaya but thanks to a valuable cameo of 43 from Isuru Udana, they somehow reached 159 runs before losing all their wickets. Vikum Sanjaya was the pick of the bowlers with 4 for 25 while all rounder Bhanuka Rajapaksha bagged 3 wickets.

In reply, JKH started off well with Dimuth Karunarathne leading from front. Lahiru Milantha, Sandun Weerakkody, Roshen Silva and Banuka Rajapaksha could not get the scoreboard going but Dimuth took responsibility and shepherded his team until the finishing line. They reached the target in the 34th over with 4 wickets in hand. Rajeewa Weerasinghe, Shehan Jayasuriya, Isuru Udana, Charith Sudaraka and Keshan Wijerathne picked up a wicket apiece for the losing side.

MAS Unichela had a walk in the park against league debutants, Kanrich Finance at De Soyza Grounds Moratuwa. Kanrich won the toss and elected to bat first. Things did not go according to plan for the debutants as the MAS spinners started rattling through the line up with ease.

It was a relatively easy target for MAS Unichela. They took only 17 overs to reach it with 8 wickets in hand. Ramith Rambukwella scored an unbeaten 68 to guide his team over the line