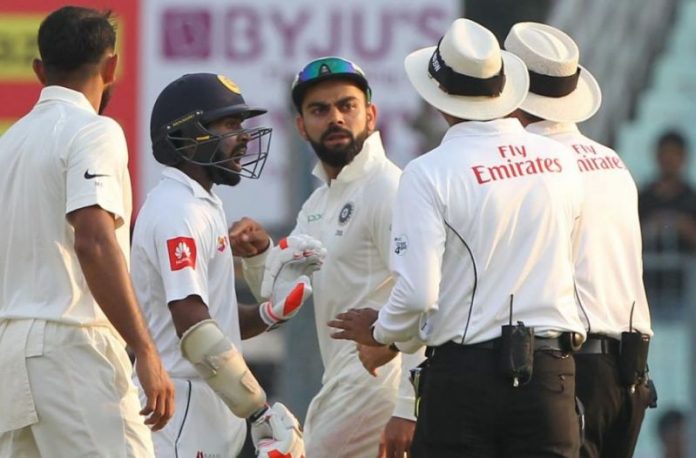 That brilliant talent spotter Sampath Perera when he took over as Trinity College’s cricket coach in September 2008, upset the apple cart. Trinity were in Division two and Perera realized that only a couple of guys in the First XI side could play the forward defense properly.

Instead of going-on to fine-tune the technique, he went for temperament. He fast-tracked the team’s under-15 wicketkeeper to the under-19 side overlooking three other wicketkeepers in the senior side. Of course there was a howl of protest. The parents complained and there were petitions. Perera struck to his guns. What followed was a golden era for cricket in Trinity. The wicketkeeper that Perera had picked would go onto become Trinity’s most successful cricket captain. Not only did he win the Big Match after 26 years but won the grand triple too – schools league, one day knockout and T-20 Championship. No other school has managed to achieve this. The name of this wicketkeeper is Niroshan Dickwella.

India are playing Bangladesh in the day night Test match at Eden Gardens in Calcutta as we read and it was here two years ago Dickwella got under the skin of Indian captain Virat Kohli. For those of us who watched Dickwella antics that day, it was evident why Perera withstood a rumpus and backed his wicketkeeper to the hilt.

In a game ruined by rain, India had set Sri Lanka an improbable target of 231 in 47 overs. The more realistic target for the tourists was holding on for a draw. But Sri Lanka were fighting a losing battle when they were reduced to 22 for four.

In fading light, it dawned on the canny wicket-keeper that time was going to be a crucial factor. So he went about deploying time wasting tactics forcing the umpires to intervene. Sri Lanka had slumped to 75 for seven and India were three wickets away from going 1-0 up in the three match series.

Dickwella first infuriated Mohammad Shami asking him to hold on despite the bowler being ready to send down the delivery. An angry exchange took place between the local boy and Dickwella. “This is Calcutta. This is my home ground,” Shami had said. The diminutive Sri Lankan replied, “I don’t care.”

Dickwella then pulled Shami for a six. Two balls later, he skipped across outside off-stump and scooped the ball over backward square leg boundary. It was a weird shot but played intentionally. Dickwella had noted that Kohli had placed three fielders on behind square on the leg-side. The umpires hadn’t detected it. The batsman then pointed out to square-leg umpire Nigel Llong that it had to be a no-ball.

Read More : Like Arjuna, expect Dickwella to get under the skin of opposition

Soon Kohli was on mid-pitch telling Dickwella to mind his own business and let umpires do the job. It was all getting to boiling point. Captain Dinesh Chandimal was the non-striker and warned Dickwella to watch his steps as he was on eight demerit points and on the verge of an ICC suspension.

Dickwella assured his captain that he wasn’t going to cross the line and watch the fun as India were getting caught up engaging him eating up valuable time. After the game ended in a draw, Kohli praised the young batsman’s attitude. “I like to see that character. I liked that competitiveness on the field. He is someone who takes lot of pride in his cricket. I am impressed with what I have seen so far of him. He has got great ability to do something very special for Sri Lankan cricket.”

“In the heat of things, I will do anything for my team to win. Afterwards, everything was normal. We had a chat on the flight as well. Those things end on the field. When you are competitive as an opponent we always respect that about any opponent. He is a very feisty character and that works for his game. Credit for him for maintaining that and I am sure he will do many good things for Sri Lankan cricket,” Kohli added.

Since his Calcutta antics, Dickwella’s career has been up and down still unable to cement his place in the side. Selectors have shown little patience with him not realizing that special talents need to be persevered with even when there is a slump in the form. Anyone who has the guts to scoop the first ball he faces that too from Kagiso Rabada of all people needs to be special. How he missed out on World Cup selections remains a mystery.

Sampath Perera though expects big things from Dickwella, on one condition though. That he remains grounded. “He is a very cunning chap. I was pretty sure he would go onto play for Sri Lanka.”

Not just getting under people’s skin, but the street smart attitude of his is a ‘need of the hour’ as Sri Lanka are desperate to find that  competitive edge again.