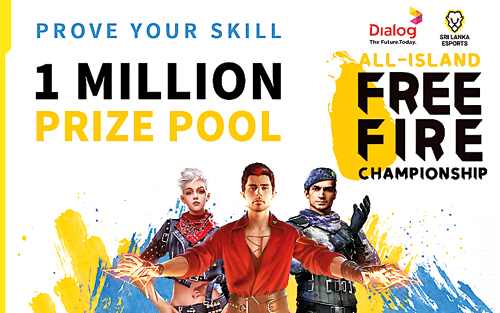 To further support the growth of Esports in Sri Lanka, Dialog Axiata PLC, Sri Lanka’s premier connectivity provider and the official sponsor of the Sri Lanka National Esports team joined hands with the Sri Lanka Esports Association (SLESA) to power the inaugural edition of the ‘DIALOG-SLESA All-Island Free Fire Championship’ which began on the 7th of June 2022.

Due to the COVID-19 pandemic which has restricted public gatherings in closed environments, SLESA’s All-Island Free Fire Championship powered by Dialog gained much traction as participants can play from remote locations such as the comfort of their homes.

Featuring an attractive prize pool worth Rs. 1 Million, this district-level Esports tournament acts as a platform to identify and develop Esports athletes to pave the way for them to compete in the international arena. The championship is organised around one of Sri Lanka’s most popular Esports titles – Free Fire, a multiplayer battle royale mobile game developed and published by Garena.

Speaking on the championship, Raveen Wijayatilake, President of SLESA stated “The DIALOG-SLESA All-Island Free Fire Championship is a step forward in readying Sri Lanka’s Esports athletes for the global Esports revolution. We’re pleased to have Dialog joining us on this journey as we endeavour to keep the country on-par with our regional Esports competitors.”