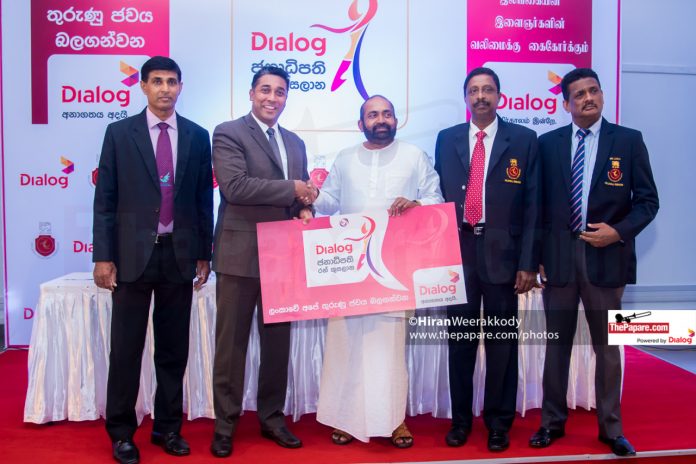 The 2019 Dialog President’s Gold Cup will include a Challenge Cup for the runners-up teams from the District Stage.

This was communicated at the Press Conference held at the Foundation Institute to officially announce the beginning of the 14th Dialog President’s Gold Cup.

The President’s Gold Cup Volleyball Championship, powered by premier connectivity provider, Dialog Axiata PLC, will spike-off this August with a record participation of over 2,500 teams and consisting 40,000 players.

The President’s Gold Cup tourney has a history spanning nearly 25 years and is hosted by the Sri Lanka Volleyball Federation. The competition is worked off island wide over a period of four months, attracting teams from over 300 Grama Seva divisions.

The matches will then subsequently be worked off at district and national levels. The President’s Gold Cup serves as a base to identify and funnel fresh talent to the national junior and senior pools, who in turn will undergo advance training to represent the country.

“The President Gold Cup is the most wildly followed sports tourney’s in Sri Lanka with participation from all provinces in the country. The intensity of the competition sets the stage to attract the best of talent from the peripheries to compete and excel at a national and international level,” Hon. Ranjith Siyabalapitiya MP, President of Sri Lanka Volleyball Federation said.

“I take this opportunity to extend by sincere gratitude to Dialog Axiata for supporting Volleyball at the national and international stage.”

“Volleyball is arguably the most played sport in Sri Lanka and has a wide audience throughout the country. I wish all teams the very best at this year’s President’s Gold Cup and the Sri Lanka Volleyball Federation for a successful tournament.”