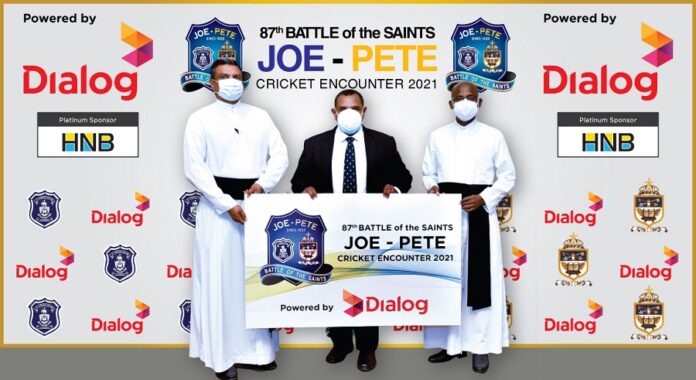 The ‘Battle of Saints’, which is renowned for its exciting and competitive brand of cricket is the only annual two-day cricket encounter that strategically limits the first innings to 60 overs each to create greater interest and result orientation. In the 2021 encounter the lads from Darley Road will be led by Sri Lanka Under 19 Captain, the brilliant allrounder Dunith Wellalage, while the boys from Bambalapitiya will be under the captaincy of the stylish batsmen and 5th year Coloursman, Nipunaka Fonseka.

“The global pandemic has crippled the world and yet, we are fortunate to embrace a unique tradition, a game of cricket which helps protect and preserve traditions, values and history” Rev. Fr. Rohitha Rodrigo, the Rector of the hosting school, St. Peter’s College, Colombo, said. “The Joe-Pete fosters a unique sense of brotherhood, unity, peace and harmony and this year, even without spectators at the grounds the spirit will prevail. Let me express my gratitude to all who fought back with courage, discipline and responsibility during the pandemic to overcome the challenges. My sincere thanks to our Principal sponsor Dialog Axiata for their support for our inspirational brand”

Rev. Fr. Ranjith Andradi, Rector, St. Joseph’s College, Colombo, said, “We have, through divine intervention and the hard work of so many, succeeded in preparing the stage for another Joe-Pete cricket encounter which brings together a spirit of brotherhood and camaraderie that exists in an unbroken chain for generations. Our students have practiced hard, and we intend to give them this momentous opportunity to showcase their talents. I would like to thank the sponsor, Dialog Axiata and wish both teams the best of luck.”

St. Joseph’s College leads the series tally with 12 wins, their last win coming under the captaincy of Ruwantha Fernandopulle in 2008, while St. Peter’s College were the winners of the 2016 encounter under Vinu Mohotty, bringing their tally to 10 wins, which ensured the Rev. Father Maurice J. Legoc Trophy was kept securely in the trophy cabinet in Bambalapitiya.

This year due to the pandemic to ensure the health and safety of all, spectators will not be present, but it is expected that large numbers of passionate past and present students will watch safely from private, remote locations. Additionally, all the very important requirements and safety protocols of the Ministry of Health will be followed.

The highly anticipated Josephian-Peterite limited overs match played for the ‘Fr. Peter A. Pillai Memorial Trophy’ which was the first one day encounter among schools commencing in 1975, has always attracted the highest number of spectators for a school’s 50 over cricket match is scheduled to be played on the following Thursday, 16th December 2021, will also be played behind closed doors at the same venue. The Josephina’s lead the one-day encounter 23-20 with 2 matches ending with no result.

Adding excitement to the games this year is the fact that six players – Dunith Wellalage, Shevon Daniel, Sadeesh Jayawardena from St Joseph’s and Wanuja Sahan, Danal Hemananda, Lahiru Dewatage from St Peters played against the touring Bangladesh U19 team and five of them are presently playing against the touring English juniors. Dunith Wellalage, Captain of St Joseph’s was appointed the Sri Lanka U19 Captain for both tours while Wanuja Sahan of St Peter’s and Shevon Daniel of St Joseph’s were regular match winners during the two series. The five playing in the English tour are tipped to be in the Sri Lanka squad which leaves on the 19th December for the U19 Asia Cup in The UAE and the U19 World Cup in the West Indies.

As the principal sponsor, Dialog Axiata has made arrangements to LIVE stream the match via Thepapare.com in the interest of all present boys, old boys, parents, supporters, well-wishers and the cricket-loving public who are encouraged to watch the match in safe and secure locations and ensure all safety protocols are maintained.

One of Sri Lanka’s largest banks, Hatton National Bank has also come forth as a co-sponsor for this year’s prestigious ‘Battle of the Saints’ encounter.