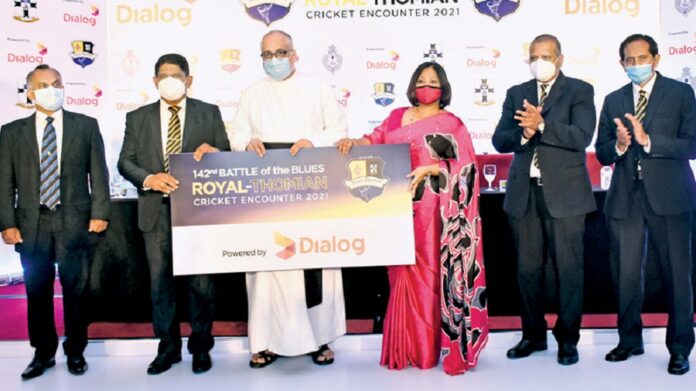 The 142-year, uninterrupted blue ribbon cricket encounter, the ‘Battle of the Blues’  will be played from 6th to 8th May, 2021, at the Mahinda Rajapaksa International Cricket Stadium – Suriyaweva, Hambantota.

The match will be played behind closed doors keeping in line with the COVID-19 restrictions and the health & safety guidelines mandated by the Ministry of Health with Sri Lanka Cricket (SLC) regulated playing conditions. The 142nd Battle of the Blues cricket encounter will be streamed LIVE on ThePapare.com and will also be available on Dialog Television channel number 72 and the Dialog Viu app. The limited over encounter, played for the Mustangs Trophy will be played in the T20 format on the 10th of May, 2021.

Read: Young Kamil steers NCC to the championship with a ton

Due to the prevailing pandemic, the game will break from tradition and be played out of Colombo for the first time in its 142-year-old illustrious history. The teams, coaches and support staff along with umpires and match officials will follow bio secure environment (BSE) protocols, in line with the COVID-19 health & safety guidelines under the supervision of Southern Province & Hambantota Regional health services.

In the 2021 edition of the ‘Battle of the Blues’, powered by Sri Lanka’s premier connectivity provider, Dialog Axiata PLC, the boys from Mt. Lavinia will be led by all-rounder Shalin De Mel, while the lads from Reid Avenue will play under the captaincy of elegant stroke-maker, Ahan Wickramasinghe.

The Royal – Thomian, has a rich and colourful history spanning across 142 years and is also one of the longest uninterrupted cricket series played in the world, second only to the annual encounter played between St. Peter’s College, Adelaide and Prince Alfred College, Adelaide, Australia, which began just a year earlier.

In 1880, the first match in which only the boys took part was played on Galle Face Green, the present location of the Taj Samudra Hotel. This was the start to the centenary series. Both teams are said to have rowed their boats across Beira Lake to play the match.

The playing fields of the ‘Roy – Tho’ has the distinction of producing cricketers who later became eminent heads of state, with S.  Thomas’ producing the father of the nation, the late Rt. Hon. D. S. Senanayake MP (1901 – 1902) and his son, the late Hon. Dudley Senanayake MP (1927-1929) as Prime Ministers of Ceylon, while Royal produced the late Rt. Hon. (General) Sir John Kotelawala MP (1914-1915) as Prime Minister and the first Executive President of Sri Lanka, the late J. R. Jayawardene (1925).

The tally between the two schools at present stands at 35 wins each. The highly-debated match in 1885, where Royal College was all out for 09 runs with no play on the second day is considered a win by S. Thomas’ and considered a draw by Royal as shown by the respective souvenir books of the two schools. The shield at present sits, akin to the crown jewels, amongst the silverware in the Warden’s trophy cabinet at S. Thomas’ College Mt. Lavinia, after putting up a superb performance in 2019 under the captaincy of Sithara Hapuhinna, which will be challenged by a determined Royal XI, this year, who racked up impressive wins during the COVID-19 impacted calendar.  The boys from Reid Avenue last won the coveted shield under stewardship of Geeshanth Paditharatne in 2016.

In 2019, on the 140th edition of the Royal-Thomian, Dialog rekindled a long and successful partnership with Sri Lanka’s Blue-Ribbon Big Match, The Battle of the Blues. The 142nd edition of the Royal-Thomian will be the thirteenth year that the match is sponsored by Dialog. Sri Lanka’s premier connectivity provider, Dialog Axiata has also made a pledge to contribute Rs. 1,000 for every run scored and 10,000 rupees for every wicket that falls. Last year’s exciting encounter contributed Rs. 1,008,000 to the ‘Play for a Cause’ pledge. The proceedings were directed in consultation with the Principal of Royal College and the Warden of S. Thomas’ College to support and empower deserving schools in the country. Since the inception of the ‘Play for a Cause’ pledge, Rs. 6,151,000 worth of cricket gear was donated to ten deserving schools.

Played in the highest tradition of excellence, the two schools have a formed a bond of mutual respect, camaraderie, sportsmanship, and friendly adversaries on and off the field, which has stood for almost one and a half centuries. As remarked by a yesteryear Principal of Royal College, “There is no Royal without S. Thomas’ and no S. Thomas’ without Royal.”