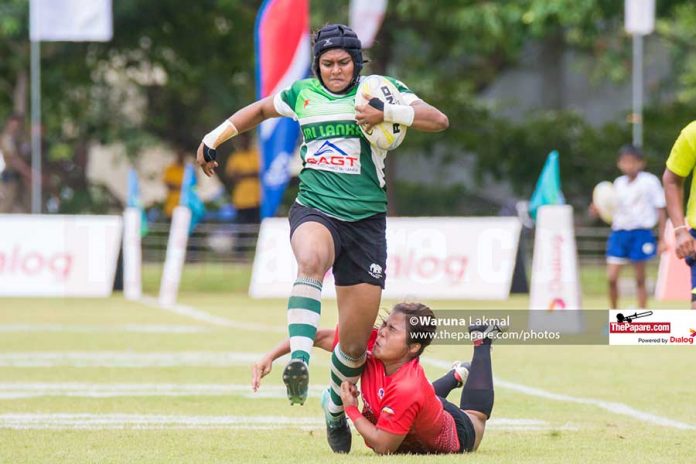 The first leg of the 2019 Asia Sevens Series, kicked off today in Incheon, South Korea, as the Sri Lankan Women’s team faced Hong Kong in their opener in Group C of the table.

The game started off with a try for the Hong Kong ladies who put the Sri Lankans under immediate pressure. Last year’s top try scorer of the tournament, Natasha Olsenthorn drew first flood for her side, after burning out the Sri Lankan wing.

It didn’t take too long for our ladies to strike back as Thanuja Weerakkodi scored what was THE try of the match. After collecting the ball deep inside their own ’22, Weerakkodi stepped, fended and sprinted 80 meters to score Sri Lanka’s first try. The conversion attempt was unsuccessful.

As the scores remained level with just 2 minutes remaining till the end of the first half, Hong Kong scored back-to-back tries and extended their lead to 19 points to 5 at half time.

The second half got underway as the Lady Tuskers were desperately trying to attack and breach the Hong Kong defence to get back in the game. That’s when Anusha Atthanayake burst through a gap in the midfield and ended up beside the posts giving Sri Lanka a fighting chance. But as the conversion went astray, our local ladies had to score twice if they wanted to win.

But, the girls in red and blue were too hard to break – they scored a fourth try under the post to slowly steal the game away from Sri Lanka and followed it up with another try at the brink of full-time.

The game ended 33 points to 10 in favour of Hong Kong.

Big win for the Ladies!

After the 33 – 10 defeat in the first game, Sri Lanka was bound to make a comeback in the second match against Malaysia, who have been in good form in the recent past. But, just like every other year, the Sri Lankan ladies didn’t fail to dominate the Malaysians and secure a victory as they called it a day, with one more game left against Japan which will take place tomorrow at 7.35 a.m.

However, the game started off with a bang for the ladies, as two tries came in quick succession giving Sri Lanka just the start they needed for a big finish. Ayesha Kaluarachchi and Anusha Atthanayake scored under the posts putting the side 14 points up.

But, the Malaysians struck back with a try at the brink of halftime and managed to narrow the gap to just 9 points with a whole half to play for.

The second half began just the way Sri Lanka wanted. It was total dominance as three tires were scored by the local girls whilst preventing the opposition from adding any more points.

Nimesha Wijewardana, Sanju Wijethilake and Thanuja Weerakkodi managed to get their names on the score sheet as Sri Lanka sealed a convincing victory over Malaysia.

The Sri Lankan Women are set to meet the Japanese Women tomorrow in their final group stage game at 7.36 a.m. in order to complete the round robin and get into the Knockout stages.