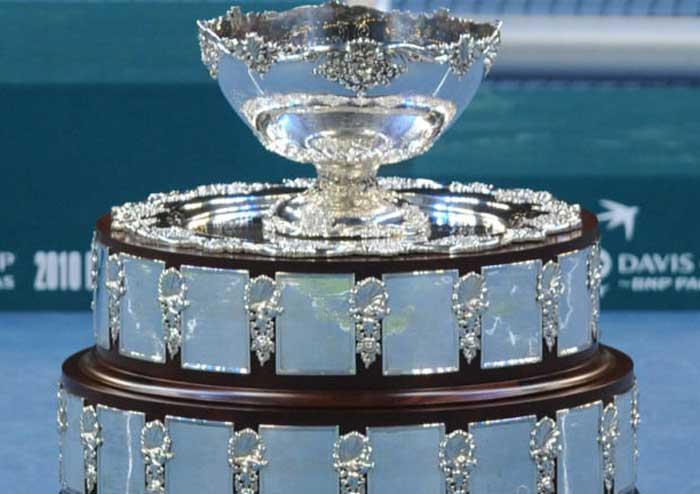 The history of Davis Cup goes back to the hallowed walls of Havard; specifically, four members of the university Tennis Team back in 1899. Dwight F. Davis, whom the trophy is named after, together with three team members were architects of the tournament.

When it first started, it was known as the International Lawn Tennis Challenge, just a tennis match between the Americans and the British. The passion for Tennis and this tournament ran through Dwight`s veins, as he went on to purchase a sterling silver trophy from Shreve, Crump & Low, using his own funds of about 1000$.

Even though the idea of challenging the British came to Dwight 1899, it took him a year to see it through. The first match between the United States of America and England, then competing as the British Isles, was played at Longwood Cricket Clun in Boston, Massachusetts in 1900. United States won the trophy racing into an unassailable 3-0 lead.

The following year, the two countries did not compete but United States won the tournament once again in 1902 and the British replied emphatically winning it through the following three years. It was in 1905, that the tournament expanded to include four other nations; Belgium, Austria, France & Australia. (A combined team from Australia and New-Zeeland participated till 1914).

The tournament kept on expanding. By 1920, twenty nations were part of this tournament and thus the world cup of tennis was born. The trophy was eventually named Davis Cup, after Dwight F. Davis`s trophy, which was designed by William Durgin and crafted by Rowland Rhodes. Dwight F. Davis later went onto become a prominent politician in the United States in the 1920s, serving as US Secretary of War from 1925 – 1929. Dwight also served as the Governor General of Philippines from 1929 – 1932.

The tournament underwent another change in 1981, were the present completion system came to be. Sixteen of the best national teams would compete in the World Group, while all the other nations will compete in one of four groups, in one of three regional zones; Americas, Asia/Oceania and Europe/Africa. Each of the three regional zones consists of four groups. Groups I and II play elimination rounds, with the losing teams faces relegation to the next lower-group. The teams in Groups III and IV will a play a round-robin tournament with promotion and relegation.

The competition spreads over four weekends, while each elimination round will be held in one of the countries. It will be played in a format of best of five matches (4 singles and 1 double). The International Tennis Federation (ITF) determines the host countries, for all possible match ups, before each year`s tournament.

The competition celebrated its 100th final in 2012, which was also marked as the start of the centenary year for ITF. In the all-important final, Czech Republic beat Spain 3-2 in dramatic contest which went right down to the wire in the O2 Arena in Prague.

A legacy that dawned within the honored walls of the Harvard University continues up to date, creating a unique team environment in an otherwise individual sport. Dwight F. Davis, when he first wanted was just to challenge the British in a tennis match. He would never have thought that his trophy, made from his own funds, will become the dream of every tennis player in the future.