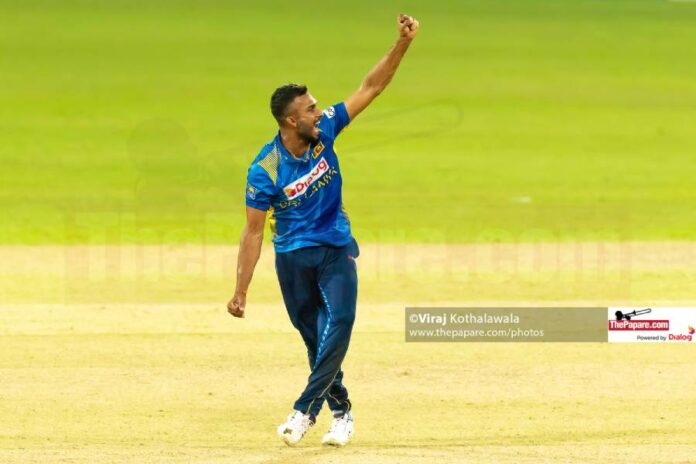 Sri Lanka messed up a fine opportunity to square the three match ODI series against India on Tuesday. The hosts put up a remarkable fight back after a meek surrender in the first game but eventually, when put under pressure, they cracked. Virtually everyone seem to be knowing the options that Sri Lanka should take that night at RPS except the man who mattered; the captain.

It was an awful night for Lakshan Sandakan and Kasun Rajitha. Both offered plenty of freebies bowling either to the pads or short and to make matters worse, Sandakan erred with his line too sending down as many as seven wides. Less said about their fielding the better. Such a shame that after five years of international cricket, Sandakan still cannot land six balls in one spot. He will have to do a lot of spot bowling to earn his place back.

Speaking to journalists after the game, Dasun’s take on the game was pretty interesting. He was of the opinion that had he brought himself or Chamika Karunaratne on instead of persisting with Sandakan, he would have been torn to pieces for not trusting in his premier bowler, he argued.  Well, that’s plainly defensive tactics.

Dasun seems to be thinking that the best way to escape the blame game is by palming the responsibility off to someone else. Sandakan has been given a battering after the game but had Dasun taken some sound decisions, the team could have won the game and ten important points on their way to the World Cup.

There are days that your premier bowlers go for runs. Similarly, your back up bowlers on certain days tend to do a better job. Dasun had not just two but three options with Dhananjaya de Silva being the other apart from himself and Karunaratne.

Furthermore, if we heard him right, he is not considering Karunaratne as a front line bowler. So, if he is an all-rounder, what is he doing at number eight?  Very strange indeed.

When your back up bowlers are doing the job, back them because they have got momentum behind them. Sanath Jayasuriya was never a front line bowler but he finished the quota of ten overs in many games. Dasun’s actions were odd. Him defending his actions was out of line. Surely, you expected more from a man who humbled Pakistan in their own backyard.

It is also hoped that the team management and the selectors had a few words with Dhananjaya de Silva and didn’t mince any of those words. Being the most senior player in the side and the deputy, Dhananjaya should have been much more proactive than what he exhibited that night.

Dasun, however, will learn from his errors.  He needs to be given the long rope unlike Kusal Janith Perera, who was appointed in June and axed in July. Surely, that’s not the way to rebuild a team.

KJP bit off more than what he could chew. He was captaining the side, opening the batting and keeping wickets. Before long it was proved that he was having too much on his plate.  First they stripped him of captaincy, then told him that he wasn’t going to keep wickets and had he not been ruled out of the series with the shoulder injury, they would have got him to bat in the  middle order as well to balance the side.

Like KJP, Dasun too has burned his shouldered with huge responsibilities. Ideally, Sri Lanka should be having a specialist batsman at six given the troubles they have had with batting. You can’t expect your number eight to bail you out every time. In that context, Dasun opting to occupy number six is a huge call. Ideally, he is suited for number seven. But he’s moved up one slot and Wanindu Hasaranga has come in at seven.

Dasun has not done anything significant at number six so far. Even in domestic one-dayers, he’s yet to score a hundred and averages 27. So it’s all complicated. What you need to do is hope he will fire and back him. You have appointed someone who was not sure of his place as your captain and now you need to back your instincts and support him.

But there are few things that he could do right. For example not being penalized for slow over rates. Mickey Arthur often speaks about how he hates sloppy cricket. That was sloppy cricket that night at RPS.

All this bashing about this Indian team being a second string side was uncalled for. You have in this Indian side two guys who have played over 100 ODIs and three guys with more than 50 ODIs. Dhananjaya de Silva with 50 ODIs to his name at the start of the series was Sri Lanka’s most experienced.

By the looks of it, Sri Lanka will have to play the qualifiers for the World Cup. The good thing is India and England aren’t going to be your opponents in qualifiers. There will be weaker teams and the experience gained by competing against formidable sides will stand you in good stead.