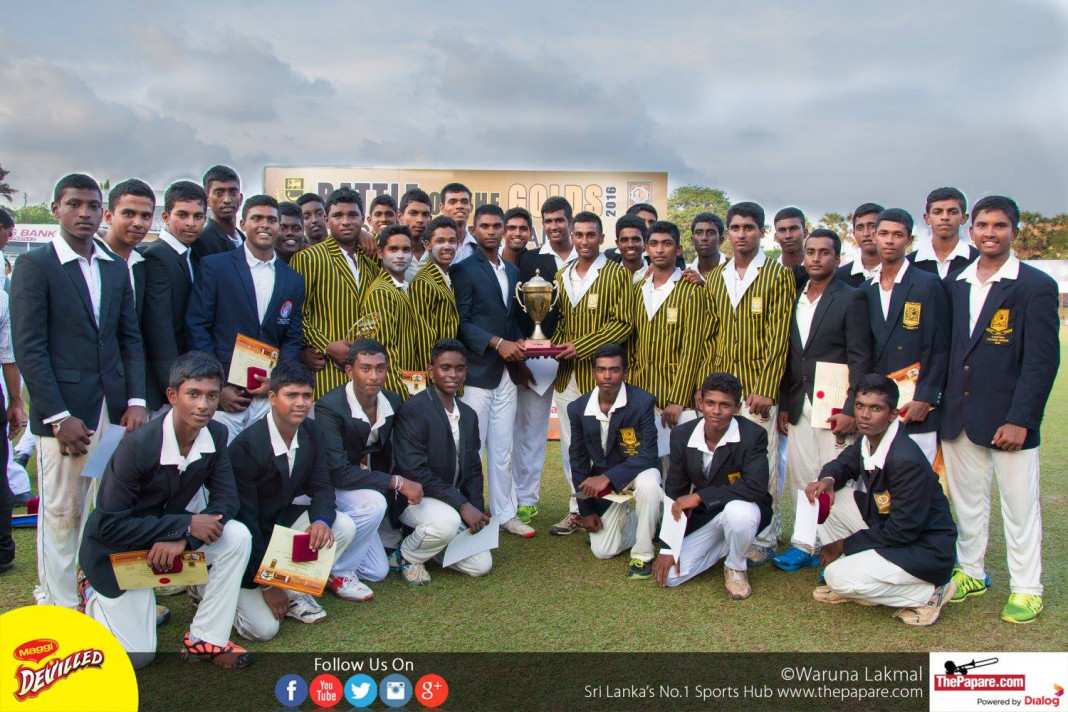 Thimila Vidyasekara of D.S.Senanayake College came out to bat with the night watchman from the day before, Sachin Bandara after losing his partner Vihan Gunasekara at the end of day one of the Battle of the Golds in P. Sara Oval for the 10th time.

The match ended up in a draw, leaving the cup from two years ago safe in a cabinet at D.S. Senanayake College for another year.

Unlike the day before, when D.S. started going after the Mahanama bowlers from the get go, scoring a blazingly fast 24 before the end of day’s play, the pair who came in were diligent and careful with their bats to make sure they didn’t give away their wickets early in the morning. They scored a slow yet steady 36 in 18 overs until Sachin was caught leg before wicket by Harsha Vithanarachchi.

D.S. was playing the long game, using their time to score runs, not in a hurry that could have made them vulnerable to lose a couple of wickets early, given their sub-par performance last season. The captain and the vice captain lead the way, scoring 65 off 99 balls and 55 off 90, respectively, collectively contributing to more than half their team total. This was expected of them, specially from the National U-19 opener, Kaveen Bandara, given their experience in much bigger competitions. A couple of their team mates helped them, playing the supporting role at the other end. D.S. had scored 194 for 7 when they decided to declare.

Mahanama batsmen came out all guns blazing, knowing well that the match was going to end up in a draw, for there was not enough time for a D.S. 2nd innings. They were scoring consistently at 4 runs an over when Muditha Laksha picked up Thanula Sandesh. In form Nadun Welikala joined Sahan Peiris to give Senanayakian bowlers head-aches, putting up a partnership of 103 runs for the 2nd wicket. Right-arm leg-spinner Pasindu Adithya spelled doom to the highest run partnership in the match, castling Nadun for 51. His partner Sahan, followed him the next over for 57, right before the umpires called it a day, ending the 10th Battle of the Golds in a draw.