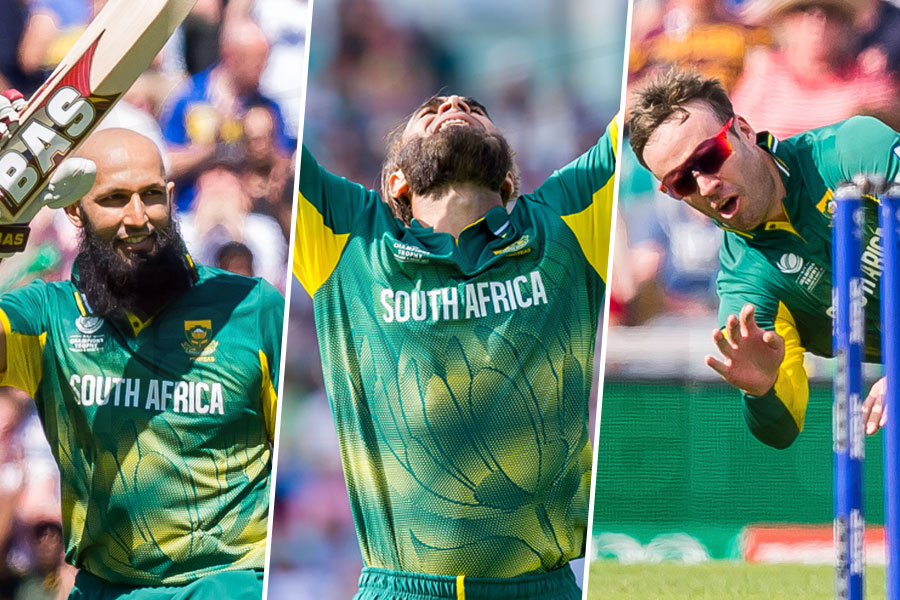 Imran Tahir demolished the Sri Lankan middle order as South Africa won their opening game of the ICC Champions Trophy 2017 beating the South Asian Islanders by 96 runs at The Oval grounds on Saturday.

Sri Lankan batting ruined their chances of registering a win against the world number 1 ranked team when Tahir took 4 for 27 to derail the Lankan chase, restricting the number 7 ranked team for 203 after Hashim Amla’s 25th ODI century propelled South Africa to 299.

Chasing exactly 300, Dickwella who was one of the most impressive players from that 0-5 whitewash against South Africa got Sri Lanka off to a flying start together with Upul Tharanga. The two left-handers completely blasted Kagiso Rabada and Wayne Parnell adding 69 off 50 balls before Dickwella’s brisk knock of 41 came to an end thanks to Morne Morkel’s bowling.

Watch – Near Live ICC Digital Clips of the SLvSA match

Kusal Mendis chipped to mid-on and AB De Villiers hung onto a cracking one-handed take as Sri Lanka lost their second wicket at 94 in the 12th over. Tharanga and Chandimal consolidated for little below half-a-dozen overs but the latter’s poor judgment of running for a mis-field cost the wicket.

Imran Tahir in the very next ball trapped Chamara Kapugedara for a golden duck with a wrong-un as Sri Lanka commenced their batting slide. Tharanga slogged straight to deep extra-cover off Tahir after a responsible 57 off 69 balls which had some elegant boundaries scored from the pull. Tahir continued to run havoc when he dismissed Asela Gunarathne for 4 with the Soldier chipping straight to point.

Kusal Janith Perera tried his level best to keep Sri Lanka’s hopes alive with an unbeaten 44 but the South African seamers, Morris and Rabada rattled the lower order to let Tahir come back for his final spell and end the innings in the 42nd over.

Earlier after electing to bowl, Lasith Malinga who returned to the ODI team after 576 days along with Sri Lanka’s most successful ODI bowler in recent times, Suranga Lakmal bowled wicket to wicket with excellent control to keep Amla and De Kock to restrict the Proteas’ openers to 32 in the first powerplay, their joint second lowest since the ICC World Cup 2015.

Pradeep struck in the first ball of his 3rd over when he induced an outside edge of De Kock and Dickwella took a neat diving catch. Pradeep was unfortunate when Malinga dropped a straightforward chance off Du Plessis at deep fine-leg when he had only 8 runs to his name.

Since the reprieve, South Africa regained momentum by gradually accelerating with Amla and Du Plessis taking singles at will. Du Plessis and Amla specifically targeted Malinga in the field as they converted one’s into two’s quite often.They added 145 runs in 129 balls for the 2nd wicket before Pradeep came back for his 2nd spell and removed Du Plessis for 75 who pulled towards mid-wicket where Chandimal took a smart catch.

De Villiers’ stay was brief as he mistimed a pull and handed a simple catch to Kapugedara off Prasanna as Sri Lanka captured 2 wickets for 5 runs within 7 balls to stage a comeback. David Miller perished for 18 when he top-edged to third-man off Lakmal and Amla was caught short of his crease courtesy an excellent throw by Kusal Mendis from deep mid-wicket as Sri Lanka picked up 4 quick wickets.

Tharanga’s direct hit from covers sent back Chris Morris to the pavilion for 20 but JP Duminy made a quick-fire, unbeaten 38 off 20 balls to set a daunting target. Tharanga stepped in as Sri Lanka skipper after regular leader Angelo Mathews failed to overcome a calf injury but he is now at risk of getting a ban from ICC for his slow rate as they took more than four hours to bowl their overs, exactly 37 minutes over time.