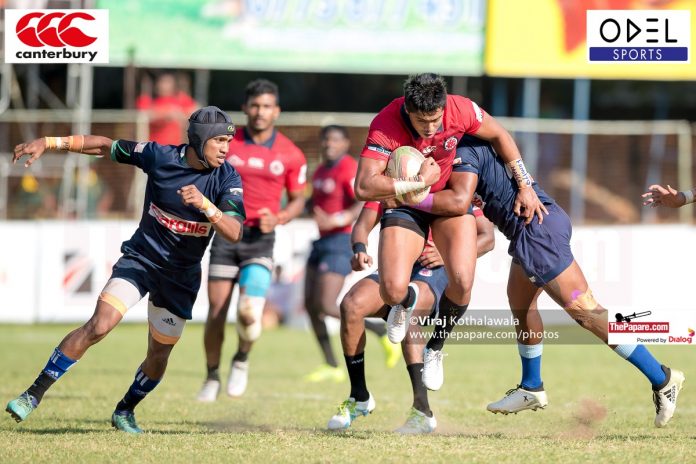 Hosts CR & FC held on by the skin of their teeth to secure a 17-13 win against Police Sports Club despite Emosi Vunivosa’s magic with ball in hand as the Longdon Place lads kicked off the 2019/20 Dialog Rugby League season with a win.

Police kicked off proceedings as brothers Eroshan and Sachith Silva returned to their starting line-up even though the regular skipper missed out as Eroshan Silva was the stand-in captain for the day.

Meanwhile, CR & FC opted to proceed without the Sri Lanka 7’s stars Kevin Dixon and Reeza Rafaideen as Riza Mubarak made a comeback to the reds while Dinuk Amarasinghe and Sandun Herath made their debuts for CR.

The cops got off to a promising start with an early penalty through Janith Chandimal. He had the opportunity to double the lead but failed with the boot the second time around as the scores remained 3-nil in favour of the visitors. (CR 00-03 Police)

The going got tough for the home team as the weather deteriorated quickly, however, the Police defence held on to see through the first quarter of the game without conceding points.

CR pressed hard, finally getting the better out of the vising defence as the hosts stretched their attack out-wide and Chanaka Chandimal set up Janidu Dilshan for his first try of the season. Riza Mubarak made no mistakes with the extras as the hosts got into the lead for the first time in the game. (CR 07-03 Police)

Fijian Emosi Vunivosa brought about his magic towards the end of the first half as he made a break through the heart of the CR defence, weaving his way through only for Sachith Silva to drop the ball cold with the try line at his mercy.

Risith Silva saw yellow for the visitors on the stroke of half time as the hosts received one final opportunity to extend their lead, however, Riza Mubarak missed in uncharacteristic fashion as the first half ended with a slender four-point lead to the reds.

Police entered the second half with everything to play for, scoring first to tighten the screws on the game. The men in blue brought out their rolling maul as Hooker Rasith Silva crashed over from the tail to help them go into a single point lead with more than 30-minutes left in the game. Janith Chandimal failed with the conversion as he seemed to lack direction off the tee. (CR 07-08 Police)

CR’s momentum seemed to take a dent as they fell back by a single point on the scoreboard. Their lead was soon restored as Police Prop Lahiru Pavithra saw yellow for a high tackle. Riza Mubarak found his target again, slotting over from the resulting penalty as the lead changed hands once again. (CR 10-08 Police)

Police once again squandered the chance to regain the lead as Janith Chandimal missed another penalty and the visitors were duly punished following this as they conceded their second try of the game.

Janidu Dilshan reacted first, taking a quick tap, catching his opponents off-guard as he found space on the near touch line. Dilshan put on the after burners, and set up Gemunu Chethiya as the former Josephian rounded off the score under the post.

Riza Mubarak slotted over with ease from up close as the home side took a 9-point lead, leaving Police needing two scores to get the win. (CR 17-08 Police)

Vunivosa was at hand to pick the pocket of his opponent, however, surprisingly did not have the speed to go all the way as he was brought down high by Rahul De Silva near the 22-meter line. Rahul saw yellow for cynical penalty.

Police made their extra man count as Sujan Kodithuwakku found his way to the try line. Police opted against the conversion with time running out on them, leaving them trailing by 3-points with 2-minutes left to play. (CR 17-14 Police)

Rehan Weerakoon was sent to the sin bin no sooner after coming on for Chanaka Chandimal, giving Police one final chance to go all out against the 13-man hosts.

The final opportunity went as fast as it arrived as the butter fingers from the visitors meant possession changed hands and the hosts hung on for a hard-fought win in tough conditions.

CH&FC 2nd half resurgence secured them a draw

Havelocks open their League campaign with a comfortable win

The new league is HERE!