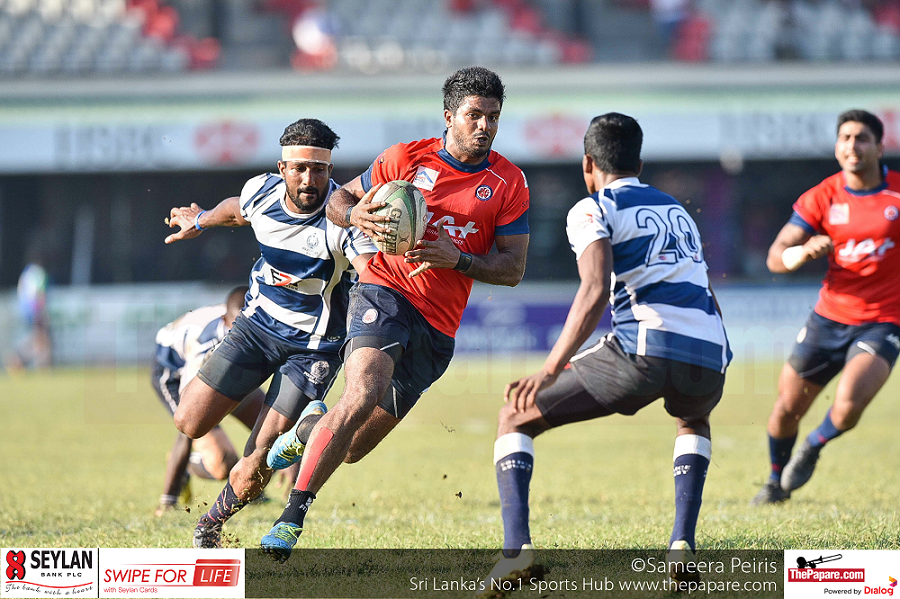 
The weather conditions over Police park were all too good for the play of rugby. Police buoyed by their heroic win against Army last week, were determined to pull off yet another at the expense of their visitors, who in contrast were trying to avoid a 4th straight defeat. Things didn’t go well for the hosts early on as they looked sluggish to react especially at the high ball situation. After collecting the kickoff, the Police up and under  was ill judged by their players which gifted CR possession. The Reds swung the ball from one corner of the field to the other and within just 90 seconds and center Ashan De Costa scampered through for a try. Full back Prince Chamara’s conversion attempt only managed to hit the uprights. (Police 00 – CR 05)

Within minutes CR went on to double their advantage with second rower Gayan Jayamanna grounding the ball on the line off a 5 meter rolling maul. Prince Chamara’s conversion attempt however was once again off target. (Police 00 – CR 10)

The two back to back tries conceded within the first 5 minutes, finally awakened the police players from their slumber and from there onward they did manage to dominate the 1st half. Their forwards took the initiative and opted to run against the CR back line which enabled them to gain much needed yards and have the CR defense on its toes. The hosts scored their first try in the 15th minute through their dynamic No.08 Radeesha Senevirathne who affected a magnificent try from close range. Full back Rajitha Sansoni converted to bring police right back into the game. (Police 07 – CR 10)

Sansoni was called back into action a few minutes later when Police were awarded a penalty and he obliged bisecting the uprights with a neat kick from 25 meters out. (Police 10 – CR 10)
With no short of confidence Police had CR on the ropes but against the run of play CR came storming back through a brilliant try scored by Winger Kavindu Perera who left the Police defence in befuddled using his sheer pace and clever stepping. Prince Chamara added the easy extras to put CR back in business. (Police 10 – CR 17)

The try however did not affect the police momentum as they scored yet another try through Radeesha Senevirathne in the 30th minute. The try went unconverted but Police went ahead 5 minutes later through flanker Joel Perera who pierced the CR defense to score besides the posts. Sansoni was on target with conversion attempt as Police went into the half time break with 5 point lead.

In contrast to the 1st half CR dominated the 2nd half as they pinned the hosts inside their own half with some deep tactical kicks. Despite the territorial advantage, CR struggled to build any momentum due to cardinal errors at the break down which gave away possession back to a relived Police outfit who had to work tirelessly in defense. To their credit the hosts too kept the CR backs at bay with some brilliant drift defense while the CR forwards were kept under control by their Police counterparts marshaled by No.08 Radeesha Senevirathne. CR did manage to reduce the deficit in the 55th minute through the boot of Nalin Kumara who fired across a 25 meter penalty. (Police 22 – CR 20)


CR kept pressurizing the home side and did well during the breakdown, winning back possession but they could not make anything out of it due to some brilliant last gasp Police defending.


The score remained unchanged until the 80th minute when CR were won back possession and earned themselves a penalty almost near the half way line. With the game hung in the balance, Nalin Kumara stepped up to the occasion and delivered the goods with a fine 45 meter kick that sailed through the uprights and with that CR clinched the game to end their league campaign on a winning note.