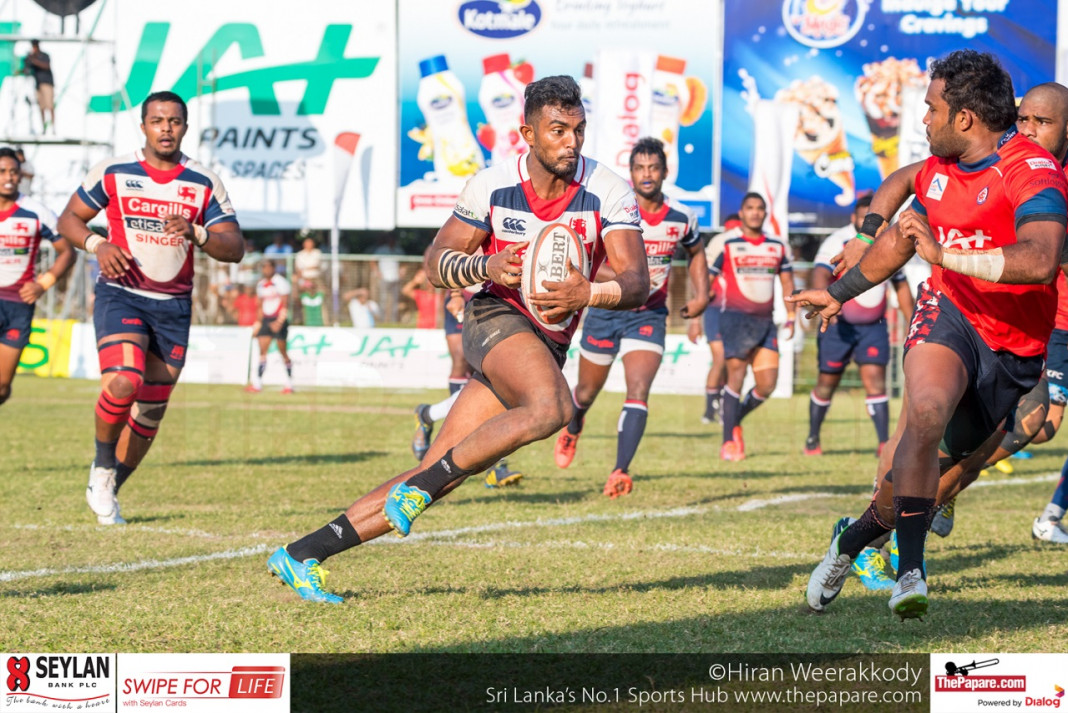 An entertaining game was played at the Dialog Rugby League week 9 between the defending champions Kandy SC and their arch rivals CR&FC, this evening at Longdon Place.  Visitors led 24 – 08 at the half time and the full time stood CR&FC 27 (4T 2C 1P) –  Kandy SC 32 (5T 2C 1DG).


The hosts CR&FC when on to the field with a positive note to break their 6 year hoodoo over the Kandy SC. However, lack of communication, decision making and perhaps some leadership skills denied them from a historical comeback win.

First up it was Danushka Ranjan who crossed the line with crispy handlings coming from Thilina Wijesinghe to Richard Dharmapala in the 5thminute. Wijesinghe the full back made the tough conversion look so easy from the left flank. CR&FC looked frozen in defence in the first quarter of the match.  In the 9th minute a tactical lineout from Kandy saw no contest and pressure from the opposition. Prop Ganuka Dissanayake scored the second try with a lovely off-load from Suhiru Anthony from that lineout. Wijesinghe missed the extras. (CR 00 – 12 Kandy)

Reds playing on the back foot finally managed to come to the opposite half and Kandy conceded a penalty for not supporting the body weight in the breakdown. The man in form Tarinda Ratwatte curved in the 35m penalty in to uprights in the 12th minute of play. It looked like the hosts gaining momentum after the first blood, then came some sensational work by the scrum half Kavindu De Costa who made an almost 50m try foxing the Kandy defence. Ratwatte missed the conversion. (CR 08 – 12 Kandy)

Once again the hosts not benefitting by putting the penalty kick in to touch saw Kandy take advantage, as a result Ranjan made his presence felt by scoring his second try. Wijesinghe yet again nailed a peach of a conversion. Soon after Tarindu Chaturanga Kandy’s flanker was sin-binned for an illegal tackle arms going around the neck. (CR 08 – 19 Kandy)

The subdued hosts looked out of options and they did not contest a single lineout which did look like a practice session for Shehan Pathirana. The visitors fine-tuned to work the ball left to right – right to left as Pathirana the lock/flanker scored the bonus point try in the 28th minute. Wijesinghe missed the extras.

Then came another blow for the Reds as former Trinitian Ratwatte walked off the park with a shoulder injury. The replacement center Amila Bandara made an immediate impact but CR just could not capitalize position and just before the half time No 08 Omalka Gunarathne made two wrong decisions,  taking the quick tap for a knock-on then he had numbers on to his left just did not pass with a 4 v 2 situation.

The first eight minutes were scoreless in the second half and soon came a sparkling break by Wijesinghe getting an inside pass from Ranjan, Wijesinghe made 15m then off-load saw Ranjan scoring his hat-trick and which is also the last try for the visitors. Arshad Jamaldeen missed the conversion. (CR 08 – 29 Kandy)

After few fringes Omalka Gunarathne made an impact from a No 8 break, although he made few errors he played with his animal instinct. Phase after phase Reds hooker Supun Warnakulasuriya managed to kiss the whitewash with a pick and run as clock stood on 55th minute. 64th minute another yellow card for Kandy as Heshan Silva going for high tackle and at the same time Roshan Weerarathne was also replaced for a collar bone injury. CR Reds managed suck the pressure with the numerical advantage and former CR captain Ishan Noor scored the third try. Kavindu De Costa made both the conversions. (CR 22 – 29 Kandy)

Former Wesley player Mithila Perera made a huge impact coming from the bench in the last quarter. One-way traffic became a nerve clinching end with CR just trailing by 5 points, however, Wijesinghe’s drop goal in the 73rd minute saw the home team victory sliding away. The clock ticked red when Rehan Silva scored the bonus point try for CR&FC and the conversion was not successful but gained a losing bonus point for the margin of 7 in addition to scoring four tries.