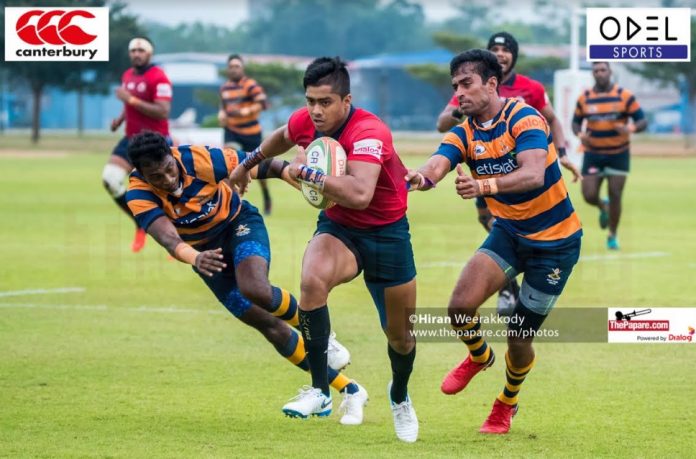 CR & FC took on Army SC at Ratmalana in the  final week of the first round of the Dialog Rugby League 2018/19. It was a see-saw battle from the start as the Soldiers led 14 – 12 at half-time. However, after a late surge in the dying minutes, CR managed to escape from the jaws of defeat scoring 12 more points to level with Army’s 24 points at the end of full-time, recording the leagues’ first draw.

Although it seemed as if CR were favourites on paper, deep down, there were many who knew Army was out for blood.

The league’s highest points scorer kick started the game with high hopes for CR and right from the get-go the Red’s were in the front. It took just 2 minutes for the visitors to get on the board as Omalka Gunarathna went over the white-wash after breaking from the back of a driving maul. Tarinda Ratwatte, added the extras as CR lined up to score their second. It was a fantastic try as the nippy little scrum-half, Harith Bandara, stepped his way towards the try line, offloaded to Reeza Rafaideen who collected it once again to go over. Ratwatte failed to add the extras. (ASC 00 – 12 CR)

That was it for the high-running CR boys, as Army gathered themselves and put on a good show by the end of the first half. After trailing for nearly 25 minutes, the gritty Soldiers scored their first try through Sudaraka Dikkumbura, who was the fortunate receiver at the end of a well-worked move, in the far corner. Gayan Salinda made no mistake with the kick as Army slowly but surely took control. Ten minutes later, loose forward Nalan Premanath touched down for the equalizer after the Army forwards did some heavy ‘pick and go’ duties. As Salinda’s kick sailed through the uprights, Army went into half time with a marginal lead.

The second half action began when Salinda converted a penalty to points, making CR pay for their unforced errors. Adding onto that, veteran prop forward, Ashoka Jayalal crashed through the CR defense line in the 55th minute, knocking down some utterly confused CR defenders off their feet, scoring a crucial try for Army – creating that much-needed bridge between the two teams. Salinda was on song with his kick as he added the extras. (ASC 24 – 12 CR)

With everything to play for, and their pride on the line, CR was giving it their all. But, nothing went their way! Fortunately for them, after Army’s kicker Salinda went out injured, replacement kicker Isuru Madagedara failed to convert the penalty to points for Army. As the game approached it’s dying minutes, Wajid Fawmy and Dulanjana Wijesinghe rose to the occasion, saving CR from the jaws of defeat after going over the whitewash. Fawmy, sliced through the defense and reached out to go over the line and Wijesinghe, barged straight through, from the back of a ruck. However, Ratwatte was successful only on one occasion, putting both teams in a deadlock. (ASC 24 – 24 CR)

What went wrong for Army?

Army lost their biggest asset, Gayan Salinda in the 50th minute which cost them the game. His absence put Isuru Madagedara on the spot, with an opportunity to be Army’s hero – but he couldn’t.

What went wrong for CR?

Tarinda Ratwatte and his lads had a bad day with decision making and kicking. Had Ratwatte converted the fairly kickable conversions, CR would be celebrating a hard fought victory – instead, some wrong calls in crucial moments and Ratwatte’s rare misses with the boot, cost them a victory.