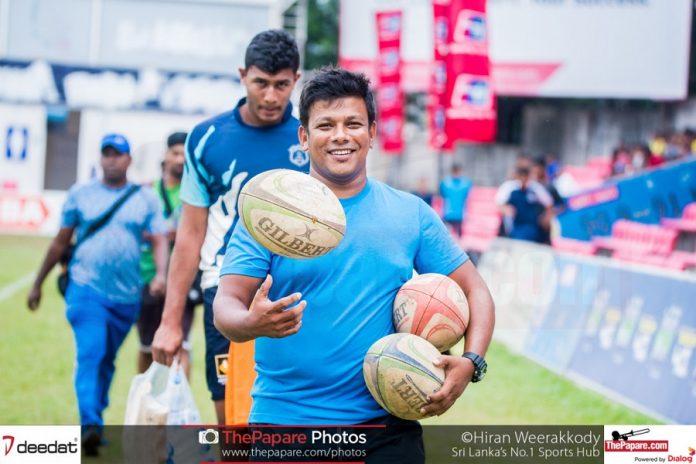 Nilfer Ibrahim, a household name in the Sri Lanka rugby fraternity has excelled in the capacity of a player as well as a coach. Starting off his rugby career at Kingswood College in the late nineties, Ibrahim went on to represent hometown club Kandy Sports Club.

Making a name for himself in the number 10 jersey at Kandy, Ibrahim was an obvious call for the national team and later took up coaching at Kandy Sports Club in 2007.

Ibrahim came to the spotlight when he coached his alma-mater Kingswood College to a league title in 2008 and then later took on the assignment at Trinity College. The 2011 team for Trinity College emerged champions in the Presidents’ Knockouts. Making the move to Colombo, Ibrahim took the Green Machine, Isipathana College to two league titles in a span of 3 years.

Hear what Ibrahim had to say when Isipathana won the Triple back in the day:

The 2014 team that Ibrahim mentored was a triple crown winning team and he currently heads the coaching department at St. Joseph’s College. Last year, the Josephians lifted their first silverware in schools rugby winning the Presidents’ trophy.

“It is a new challenge for me as I expect to take on this assignment at CR. They have a talented set of players and it will be a new beginning for me at the club” added Ibrahim on his recent appointment.

No stranger to the Dialog Rugby League, Ibrahim had coaching stints with Navy Sports Club as well as Army Sports Club in the past few seasons.

“CR & FC has a set of talented youngsters and they are capable of big achievements. We will look to rebuild and get winning ways back”

Once a frontrunner club in the Dialog Club Rugby arena, the Longdon Place club has not had the best of times in the recent past. From the 3rd place finish in 2015, CR & FC plummeted to an all time low of 5th place last season.

The advent of Ibrahim should bolster the spirits of the CR lads as the rugby administration looks to re-instate the good times at the club.

The Dialog Rugby League for 2018/19 is set to kick off in November this year.