Home Rugby Club Rugby CR bulldoze their way over for a massive win over their arch... 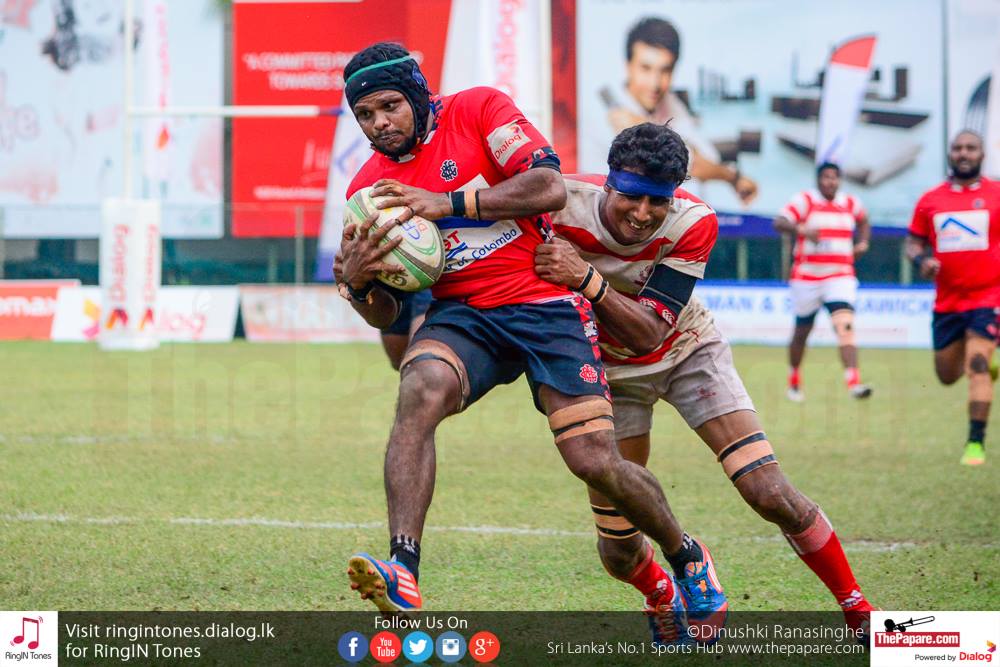 CR&FC scored a staggering 10 tries against their traditional rivals CH&FC to win their Dialog Rugby League 2nd round match by 66 points to 11.


CR&FC with two consecutive nail biting victories in their last two encounters had momentum coming into this match against their age-old foe CH&FC. With home ground advantage for CR this match promised to be walk in the park. CH&FC having lost all their matches is in all sorts of trouble.

It was a try fest at Longdon place with Prince Chamara starting proceedings after working the ball forward using their front row. Prince fended couple of defenders to go over the line and bisected the uprights to add two points to their tally.

The home side struck again in no time and it was through a 5m line out. It was Sasanka Ariyarathna who was pushed over easily by the CR front row. Prince made no mistake in getting it through the uprights. CH&FC showed glimpses of organized rugby in some passages of play. It was one of those occasions which ultimately made CR concede a penalty inside their 22. Janith Chamdimal gave his team the three points through a well taken penalty.

Sasanka Ariyarathna almost had a repeat of his first try few minutes after when he was pushed over again by the forwards. Prince made sure he adds two points for his team. There was chemistry in the CR team right through the match which helped them to dominate from the word go.

Janith Chandimal added 3 more points for his team through another penalty on the 40m line. The home side replied with another converted try from the restart. It was Mohommad Sashan who went over the line for the first time in the match. CH&FC had no clue for this onslaught from CR&FC.

CH&FC was down to 14 men just before the half time whistle when Eranda Weerakkody was sent off for a high tackle. The home side made this one man advantage count when they ended the first half with an unconverted try by Ashan Decosta.

The second half kicked off with a chance gone a begging for the visitors as Janith Chandimal missed a penalty inside the 22m. The home side went on their merry way in scoring tries. It was Pramodha Makalanda who went over the line for the first time in the match after his first attempt was ruled out due to a forward pass.

CH&FC conceded a penalty try when the ball was kicked deep into CH&FC territory with Tharinda Ratwatta speeding his way after the ball; he was allegedly brought down purposely by one of the CH&FC players. Tharinda bisected the uprights to add 2 more points to his team.

CR&FC kept on piling up the points as Kokila Samandappa powered his way through the middle to score for his team. Tharinda added two points for the home side. CH&FC bounced back with an unconverted try by Dimal Jayasingha. Ball was taken from a 5m scrum and worked along towards Dimal who fended off few defenders to go over the line.

CR&FC was down to 14 men when Iroshan De Alwis was sent to the naughty chair but it didn’t stop the in-form CR side from piling up the points. Replacement fly half Tharinda Ratwatte scored his first try off the match. Tharinda taking the ball from the scrum and fending off few defenders to go over the line. Iroshan De Alwis was given a red card few minutes after he came onto the field after being sent to the naughty chair.

CR finished off the match with another converted try by Sashan Mohommad which took their points tally to 66 points to 11 by CH&FC.

” Happy with the win but a bit disappointed that we couldn’t work on our patterns but overall good win. Looking forward to the three big games we have to face in the coming weeks and certainly this is a good foundation going forward. “