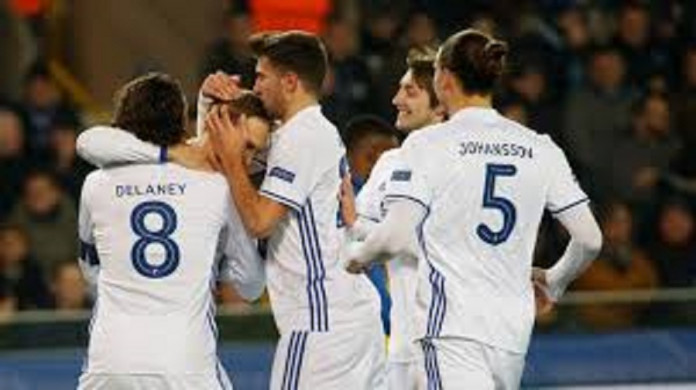 FC Copenhagen scored twice in the opening 15 minutes to secure a 2-0 victory at Club Bruges on Wednesday, but saw their hopes of a place in the Champions League knockout stages dashed.

An own goal by Bruges defender Brandon Mechele and a header from Mathias Jorgensen handed Copenhagen a deserved win at the Jan Breydelstadion that in the end was only good enough for third place in Group G.

The Danish side had needed victory and no more than a draw for Porto at home to English champions Leicester City to advance, but saw their hopes of a second round place quashed as the Portuguese side romped to a 5-0 win.

Copenhagen, who will now enter the last 32 of the Europa League, scored both their goals from set-pieces whipped into the box by Ludwig Augustinsson.

Captain Thomas Delaney got a slight touch to a free kick and the ball deflected into the net off the unlucky Mechele.

The visitors doubled their lead when Jorgensen headed home Augustinsson’s corner. It was another soft goal conceded by the home side, who lost all six of their group games in this year’s competition.