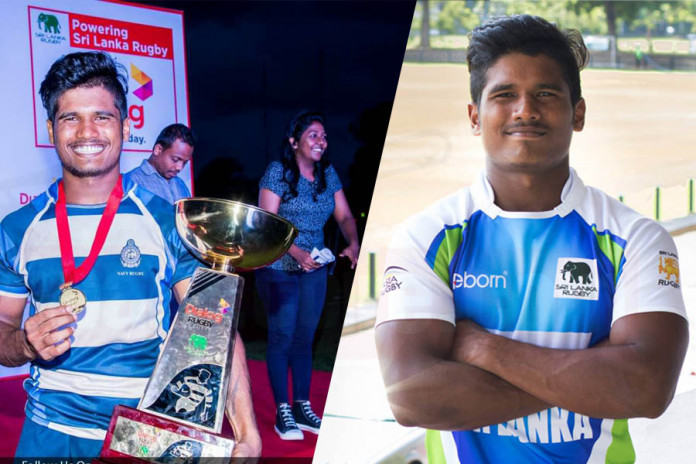 Heading to Hong Kong for his 4th Sri Lanka tour, experienced and skillful vice-captain Supun Dilshan backs the current lot of under 20 lads to retain the title they won back in 2016.

Having toured on four occasion before, Supun Dilshan the vice-captain of the under 20 sevens team believes Naveen and co will repeat the 2016 performance “Like last year, we will take it game by game and mount a title challenge. We are going there to win the title and nothing less”

Speaking about his previous tours for Sri Lanka “Yes this is my 4th tour for my country. I went in 2015 to Malaysia for the under 20 sevens and another couple of times, altogether this is my third under 20 tour”

Adding to this he has also made a name for himself in the XV’s game “the 4th tour was the one with the XV-a-side team for the same age group (U20) and I played center on that occasion, same as in the sevens format”

Talking about his exploits from last time around (2016), the center stresses that his experience will come in handy “We did not go to win a cup, we took it game by game, as things came. We played the tour for our mates next to us, We didn’t want to let our mates down and that worked wonders and helped us win. That win was very special as it was the first time ever”

The former Science College lad, currently applying his trade at Navy Sports Club spoke how these tours have helped his development and what he hopes to take from last year into this season’s tour “Last year helped me develop a lot as a player. It was a great strength for me even when I went to Navy SC as a rookie. I will take all the exposure from last year and help the lads repeat last year and even tell these bunch of guys how they played (last year) and how they will play”

Having been appointed as vice-captain, Dilshan speaks about the uncharted waters he is about to dread on “this is my first leadership challenge. I have never been given a leadership role before”

However he hopes to emulate last season’s vice-captain Omalka Gunaratne just the way he assisted captain Kevin Dixon “I had a very close eye on last year’s leaders, so I will follow their footsteps. Give Naveen the best support and take this team forward”

Speaking about this team, how well they have gelled over the few weeks of preparation “Yes the guys have glued well together, we are more-or-less together all the time. After training in the morning we nap together and get back to training in the evening. That has helped immensely”

We did not forget to question the vice-captain on how they hope to stop the big foreign lads “yes they are big made guys but we usually manage to intimidate them. We play with a lot of heart and when we go there with the belief that we can hit and stop them, they do fall”

He finally went on to say both teams have a number of similarities and hopes the odds go in their way as they seek to repeat last year “Just like last year the guys have bonded well together. And similar to what we did in 2016, we will be playing not for ourselves but for our mate next to us and we hope to retain the title”