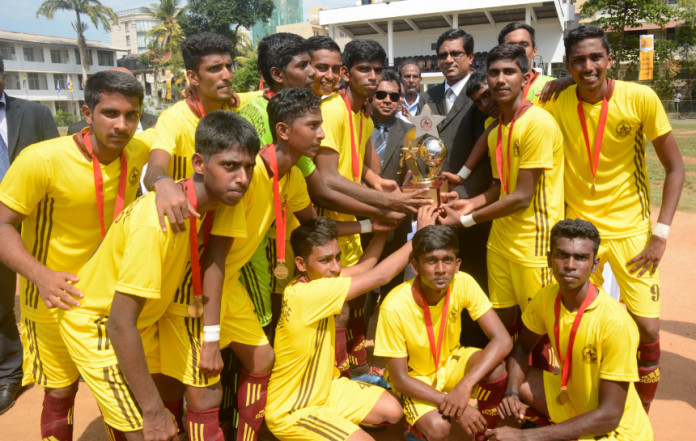 From the very beginning of the game, domination from Colombo Hindu College was visible. Accordingly within few minutes A.Praween netted the first goal for the hosts. With momentum on their side B.Dilushan netted the second goal in the 5th minute of the game.

The fans of Jaffna Hindu were stunned with these two back to back goals, and it became worse when N.Yuhendran hit the 3rd goal for his side.

Despite conceding the goals Jaffna Hinduits had several chances but they could not score due to the poor passing of the forwards.

V.Ashanan netted the 4th goal in the 21st minute of the game while both sides missed a few chances to score.

The second half of the match was somewhat promising from the Jaffna Hindu. Repelling the attacks from Colombo Hindu, ball was quickly passed to the front players which had put the brakes to the goal – hunt of the Colombo Hindu.

However it only lasted until Yuhendran put his second goal in the 61st minute of the game.

Rajendran (Mohan), the Coach of Colombo Hindu College, in an interview exclusively given for ThePapare.com shared the credit of the win with the Principal, teachers, students and old students of the school.

He also expressed his thanks to them and said he was expecting to improve the team further after the restoration of the play ground.

While Prasanna, the Coach of Jaffna Hindu, commenting on this said they couldn’t practice well and that the students were not regular to practices as the parents of Jaffna insisted the children to focus on studies than on sports. He also claimed that among the players included the team that day, 06 were under the age of 17. Yet he expressed hope that he could form a better team in future.