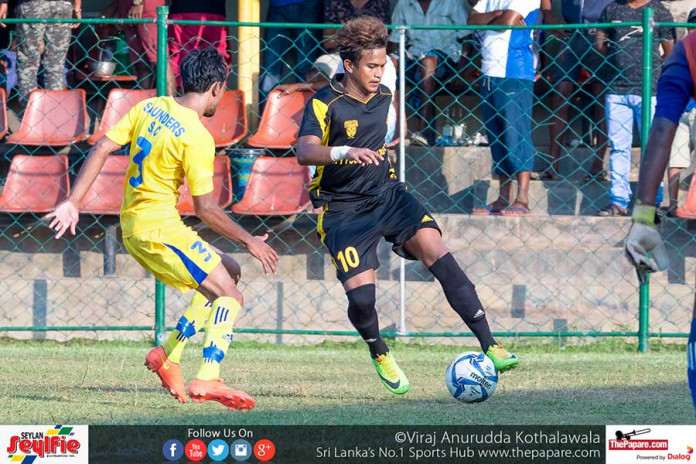 Colombo FC came up trumps when it mattered most, picking up a 3-0 win in a clash of the heavyweights against Saunders SC, to book a place in the City FL Presidents Cup semi-finals. Colombo FC went into the game needing a two goal win to progress to the semis, whilst a draw would have been enough for Saunders.

Saunders started the brighter of the 2 teams, with Niresh in particular troubling the Colombo FC defence. Colombo FC were forced into a change early on as Vikum Kumarasiri was walking a tightrope after picking up an early caution. His replacement Siraj Mohammed nearly opened the scoring but after doing well to get to Zarwan’s corner kick, he could only scoop his effort over the bar.

Colombo FC grew in to the game and took the lead courtesy of a Momas Yapo penalty, after Hettiarachchi handled in the area. Momas Yapo had another couple of great chances to stretch the CFC lead, but he saw a header in to the ground bounce over the crossbar and Asanka Viraj made a stunning save to deny his shot from an Afis Olayemi cutback, as the half ended with Colombo FC in the ascendancy.

The second half started very much the same way the first ended, with Colombo FC looking dangerous going forward. Afis Olayemi spurned a great opportunity to put Colombo FC 2-0 up after dallying too long with his finish. A good save from Asanka Viraj followed by a couple of blocks from the Saunders defence resulted in Nagoor Meera skewing the final attempt of that move wide of the far post.

Viraj was a busy man once again as a side footed effort from Siraj Mohammed came his way via a deflection off a Saunders player, but the experienced man adjusted well to get down and make another important save. Krishantha Abeysekera had a great chance at the other end to drag Saunders level but his tame effort was easily saved by Imran.

Afis Olayemi was in the thick of the second half action as he was denied by Viraj after going one on one with the keeper, and then saw a cross smashed on to the post by Rawme Mohideen, who hit a spectacular volley on the move. Zarwan scored a super goal to double Colombo’s advantage after a poor back header from Hettiarachchi failed to reach Viraj, allowing the forward to calmly lob the ball over the stranded keeper to make it 2-0.

Dhanushke Madhusanka then made it 3-0 after Asanka Viraj spilled a free kick from Zarwan into the path of the substitute, who had no problem slotting home into the vacant goal. Colombo FC doing enough to top the group with their goal difference of +1, the deciding factor in the standings of a hard fought group.

Speaking to Mohammed Roomy coach of Colombo FC he had this to say on the win “We were under pressure going into the game and our strategy was to try and score an early goal. I think we were too eager to get on the score sheet as soon as the game started and we came under pressure a bit after conceding several set pieces. However we settled in to our normal game after 20 or so minutes.”

On Colombo FC’s knack of picking up wins in crucial games “I think our squad is very motivated to perform when under pressure. Sometimes I myself put some extra pressure on them along with the motivation and sometimes you need a bit of luck as well”