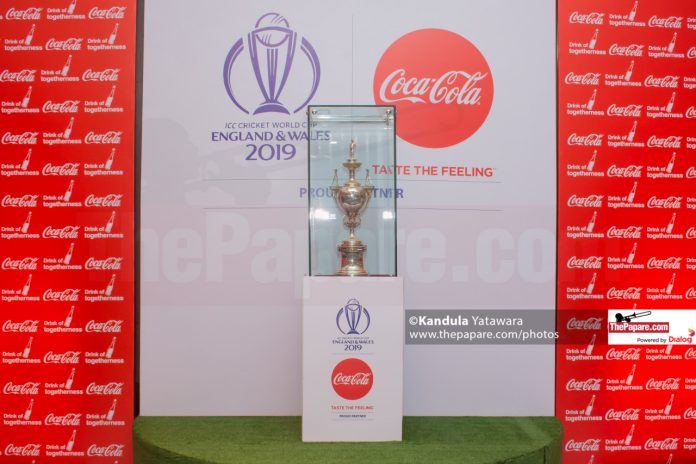 Today (2019-04-09), Coca-Cola announced that they have entered into a partnership with ICC to celebrate Cricket and the upcoming ICC World Cup 2019.

The details of this tie up were announced at a media briefing which took place at the Shangri-La hotel, Colombo.

The partnership will entail Coca-Cola as the exclusive non-alcoholic beverage partner of ICC and its tournaments for the next five years.

In the run-up to the ICC Cricket World Cup 2019, Coca-Cola is calling on fans to rally around the Sri Lanka Cricket team and cheer them as they relive the glory days of the game and set out to make their mark through the “Drink of Togetherness” campaign. A consumer engagement initiative named “From Cap to Cup” is also announced to provide Sri Lankan Cricket fans with a chance to win an opportunity to enjoy the ICC Cricket World Cup 2019 in England & Wales live.

The campaign in its initial stage, unfolds in Sri Lanka through the “Under the Cap”– UTP. The consumers only have to send a SMS to 2343, stating the unique Coke code which will be placed under the special yellow caps of Coke, Fanta & Sprite bottles too will take part in this competition.

“I can play the World Cup” – Kusal Perera

Sri Lanka’s star batsman Kusal Perera suggested that he might..

30 lucky winners will get a chance to win an ICC World Cup ticket and 600 consumers will be awarded smartphones through a digital raffle draw which will be conducted from April 1st to June 1st.

The Chief Guest at the launch event, Hon. Harin Fernando stated, “The game of cricket forms the sporting heartbeat of the nation. All Sri Lankans must come together and cheer on our lions during the upcoming World Cup campaign. I wish to especially thank Coca-Cola for stepping forward to support Sri Lanka Cricket and for taking the initiative to rally together in wishing our cricket team success during their endeavor to regain the Cricket World Cup in England and Wales”

Speaking on the partnership, Manu Sawhney- CEO, ICC stated, “We are pleased to partner with Coca-Cola and take our mutual passion for the sport of cricket to even more people across the world. We look forward to fans across the region, coming together to cheer on their teams at the ICC Men’s World Cup and be part of the greatest ever celebration of our sport”

Speaking on the occasion, “Sundeep Bajoria – Vice President, South Asia Operations, Coca-Cola, said, “Cricket is a global sport and a passion that is shared by more than a billion people. A love for this game transcends beyond gender, generations and cultures. In-line with our long history of partnering with major sporting events globally, our strategic partnership with ICC, reinforces our long-standing commitment to refresh sports fans and enhance their entertainment experience.”

“Consumers are at the heart of Coca-Cola’s beverage portfolio. The company is acutely attuned to their preferences and continuously looks at innovative ways to connect people with our brands. As part of our partnership with the ICC to inspire moments of optimism and happiness amongst consumers, we will also offer fans a chance to watch the 2019 ICC World Cup matches live. The objective of this partnership and exciting campaign is to connect all fans of cricket, our consumers, the brands and the everlasting love for the game of cricket in Sri Lanka, together. We hope that this campaign will highlight Coca-Cola’s spirit of togetherness and help us to all support, cheer for and uplift our players as they vie for the trophy in London” said Pankaj Sinha – Managing Director, Coca-Cola Sri Lanka Private Ltd.

Above mentioned five-year agreement with ICC includes all ICC tournaments around the World including the ICC Men’s World Cup 2019 & 2023, T20 World Cup 2020, U19 World Cups and ICC Women’s World Cup 2021. Coca-Cola has an 8-decade long association with the Olympics, 4-decade long with FIFA and links spanning 25 years with World Cup Rugby too.