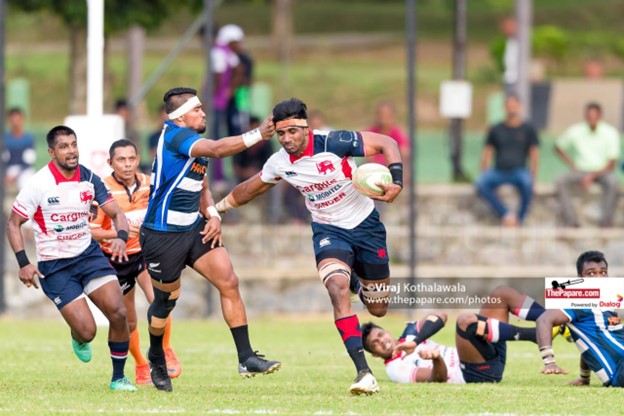 The top eight club rugby teams of the Island, Kandy SC, Havelocks SC, CH&FC, Police SC, Navy SC, Airforce SC, CR&FC and Army SC will lock horns with each other for the coveted title which will be competed over the next ten weeks.

Defending champions, Kandy Sports Club who have won the league title back to back for seven seasons will again start the competition as the preseason favorites. Kandy who were unbeaten during the regular season were awarded the championship with the super round being cancelled after just a weeks action due to the unrest in the island. Kandy will be skippered by former Trinity College skipper Damith Dissanayake with Kandy SC’s most famous son Fazil Marija will continue as the head coach of the outfit.

Kandy will face stern competition from Havelocks Sports Club who were forced to settle for the second place after the abrupt stop of the league will be determined to do one better this season. Havelocks have been one of the few sides that have managed to retain the majority of their squad from the previous season. Vimukthi Rahula will be the skipper of the park club with veteran coach Sanath Martis continuing at the club for another year.

Celebrating their centenary year, CR&FC will be focused on making their mark in the league this season. CR had to be satisfied with a 7th place finish at the end of the last season and will be hoping that some of the new recruits will provide the much needed impetus in the season. The third CR&FC captain of the Costa family, Kavindu De Costa will be the man leading the Red Shirts with Dushantha Lewke continuing as the head coach of the outfit.

Air Force Sports Club have been the most impressive side in the run up to the league having dominated the sevens competitions will be one of the teams to watch out for this season. The Airmen have a rare luxury of having held onto most of their players from the previous season and have also added a few youngsters to their mix that may give them an extra edge. Center Ishara Madushan will be the skipper of the side with Shamlie Nawaz continuing for another year at Ratmalana.

CH&FC have seen some of the big names that they had in their mix last season leave them prior to the season but have still got some formidable game breakers in their mix to call onto. Prasath Madushanka have been handed the responsibility of leading the side while  new head coach in Asanka Rodrigo will be focused on finishing better than their last seasons standing.

Navy Sports Club  are one of the few teams that have managed to hold onto the majority of their squad from the last season and will be focused on using the chemistry between the players to their advantage. Plate winners of the previous season Navy will be determined to end the first round in the top bracket and qualify for the super round of the cup segment. Stephen Gregory will man skippering the sailors while successful head coach of the league and knock out winning Isipathana College outfit, Saliya Kumara will be the man responsible for mentoring the sailors.

Police Sports Club who surprised many by finishing 4th last season are looking to finish even higher this year.  They have fueled the squad with some exciting young talent to have emerged from the school’s rugby league. The cops have handed experienced Nisal Samdhi the baton to lead their charge while influential national sevens coach Nilfer Ibrahim has been roped in as the head coach of the outfit.

Army Sports Club  Soldiers ended the season as the last ranked team of the league and will be focused on making sure they are a force to be reckoned with come the 2022/23 season. Soldiers who have one of the largest squads to pick from will have worked hard on making sure to getting their combinations right. Army are known for their physicality in the contact arears and will no doubt be up for a fight no matter the opponent. Halfback Mahesh Weerasinghe will be Captain of the outfit with Ronnie Ibrahim making a return to the club rugby arena as the Head coach  of the soldiers.

Keep it locked to Sri Lanka’s #1 Sports Hub www.ThePapare.com as we will keep updating you of all what you need to know about the 2022/23 Club Rugby Season.