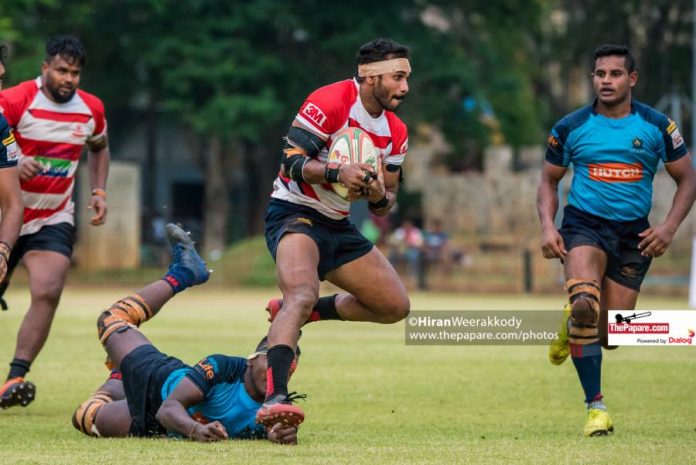 A Dialog Rugby League match between CH&FC and Airforce SC was played today at the Racecourse International Stadium. The boys from Maitland Crescent were forced to play with 14 men for the last 15 minutes, but they held on and managed to secure a much needed bonus point win over Airforce SC by 26 points to 17.

The hosts kicked off proceedings. Hirusha Sampath had the first opportunity at goal when he took a penalty from 25m out. Unfortunately, he missed the chance to put his team ahead. However, the visitors held on to the initial onslaught from CH and punched back with a try from Lahiru Udayanga.

It was Jason Dissanayake who initially made it to the try line but he lost control of the ball.

The referee brought back play since there was a penalty advantage for the Airmen. They opted for the line out and Udayanga took the ball and barged over from the maul. (CH&FC 0 – Airforce SC 5)

Soon the tides changed and Airforce were down to 14. Nuwan Rajakaruna was given a yellow card for a high tackle on Matheesha Sarathchandra. It paved the way for CH&FC to find their first try through Prasad Madushanka. Under pressure, a streak of penalties were conceded by Air Force. CH&FC finally opted to kick to touch and go for the line out. With the one-man advantage, Airforce could not defend the maul as Madushanka took the ball out and jumped over. (CH&FC 5 – Airforce SC 5)

Shortly afterwards, CH&FC added a converted try through Kushan Indunil. Initially it was Avantha Lee who took the ball from the ruck and broke through the defense line. He had one man to beat but he unselfishly sent the ball to Kushan who ran all the way to score. Hirusha Sampath added the extras to take his team 7 points ahead going into lemons.

The second half started off with CH&FC extending their lead by another converted try through Chathura Dilshan. It was another series of penalties under pressure from the airmen inside their own 10m, which led to CH&FC’s third try. After a series of phases inside the 5m, Chathura Dilshan gathered the ball from the ruck and forced himself over the try line. (CH&FC 19 – Airforce SC 5)

Airforce needed to come back into the game and got the opening they needed when 2nd half replacement Hirantha Perera was sinbinned in the 52nd minute. A few minutes later, the visitors found the whitewash through Kaushal Manupriya. From the 10m line out the Airforce maul carried the ball forward; then Jason Dissanayake sent the ball to Jehan Seelagama who took the ball inches close to the try line. Dissanayake once again took the ball from there and sent the ball out wide to his winger Manypriya, who came back in to find the whitewash. (CH&FC 19 – Airforce SC 10)

CH&FC suffered a big blow in the 65th minute when Vishwa Kiriella was given a straight red. Gayantha Iddamalgoda received the ball in their own 40m. After seeing Kiriella in front of him he sent the ball to his winger but Kiriella went ahead with the tackle and had Iddamalgoda land on his neck. It was an easy call for the ref as he gave him a straight red.

Air Force had the upper hand but failed to use it and were down to 13 shortly afterwards after Shashika Fernando and Imesh Aponsu were shown yellow cards within a space of 5 minutes.

The hosts with fresh legs on the park made full advantage out of their extra man as Ryan  Weerakoon went over for their bonus point try. He made the initial break and carried the ball inside the 10m. After a few phases with the forwards, he took the ball from the ruck and touched down to finish the move he started. Skipper Rajapaksha added the extras. (CH&FC 26 – Airforce SC 10)

In the last minute, Airforce SC managed to string together a few phases and finally managed to find the try line through Pathmasanka Weerasinghe. Iddamalgoda added the extras but it was way too late for a comeback for the Airmen.