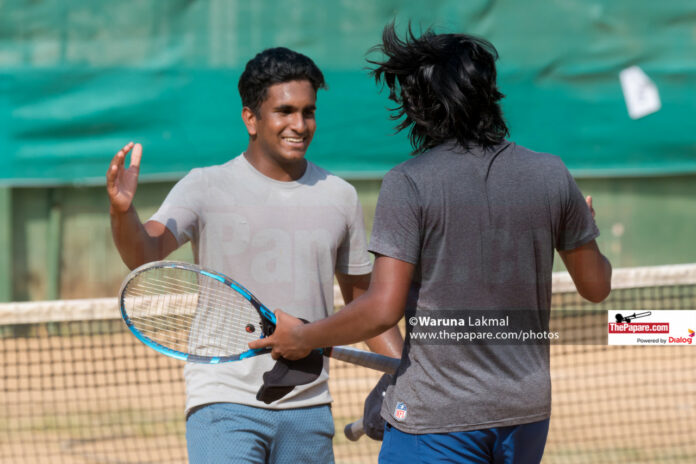 Chathurya Nilaweera and Kiran Vairavanathan celebrate their second ITF Junior Title at the end of the ITF Junior Circuit Week 2.

Nilaweera and Vairavanathan, coming in hot off their Week 1 Boys Doubles title, started the week strong by defeating an all-Indian pair in the 1st round. Debarshi Sen and Omar Rehan Sumar were the first ones to go down against the local pair in scores 6/2, 6/0.

The Quarterfinal and Semifinal ties were much tougher for the Lankan pair, but they did magnificently to defeat Devaharshith Neelam (USA) & Arjun Premakumar (IND) 3/6, 6/4, 10/6 in the Round of 8.

The semifinals were a tough three-setter as well against Hungary’s Lorant Gyori and Aussie Cristian Care – 6/2, 5/7, 10/8 in favor of the Lankans. Coincidentally, Chathurya Nilaweera’s younger brother Vichinthya Nilaweera, along with his partner Zaidh Zihar, was also fighting for their spot in the final.

The young Nilaweera-Zihar duo were up against Vekant Rishi Batlanki (USA) and Hitesh Chauhan (IND), who were also the 4th seeds of the Week 2 Doubles draw. The latter upstaged the Lankans in straights 6/3, 6/3 to reach the finals against the returning champions.

The final was a one-sided affair as Nilaweera and Vairavanathan left no room for error, being on top of each point so meticulously that their counterparts were left with no option but to surrender. Final scores read 6/1, 6/1.

The proud Sri Lankans celebrated their double merriment at the ITF Junior Circuit J5 event, winning both weeks of the Boys Doubles title. Congratulations to Chathurya Nilaweera and Kiran Viravanathan!