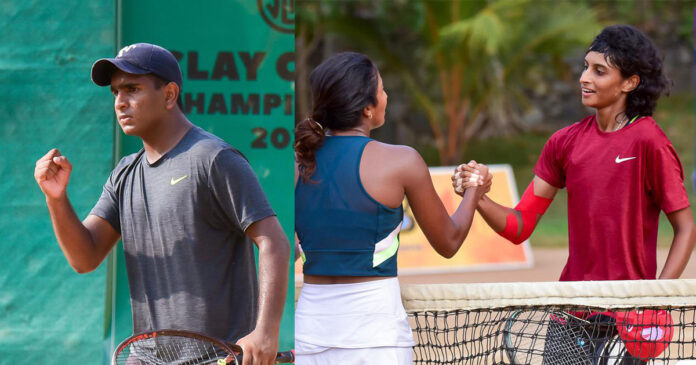 Chathurya Nilaweera and Anjalika Kurera won their first major National titles of the year 2022, the Men’s and Women’s honors at the Clay Court Nationals Tennis Championship, concluded on the 26th March at the SLTA Clay courts.

Chathurya Nilaweera started the draw as the second seed of the Men’s draw while his trusted Doubles partner Thehan Wijemanne was ranked on top. Beginning his journey to the finals from the bottom half of a 64-man draw, Nilaweera quickly reached the Semifinals to face off against veteran Dineshkanthan Thangarajah.

Nilaweera’s fresh energy was unmatched as he booked his spot in the final with a straight set victory over Thangarajah, 6/4, 6/4.

His opponent Zaidh Zihar had an equally tough draw on his way to the final as he was faced with top seed Wijemanne in the Quarterfinals. However, Zihar took on the Davis Cup player with grit, stunning the audience with a straight set 7/5, 6/4 victory.

In the Semifinals, 12th seed Ashen Silva gave young Zihar a run for his money, pushing for a three-setter. In the end, Zihar prevailed with scores of 4/6, 6/3, 6/4 to advance to the final.

Nilaweera and Zihar battled it out for the Clay Court Championship on the 26th Saturday evening, with Nilaweera taking home a comfortable win of 6/0, 7/5.

Over in the Women’s draw, Anjalika Kurera started the draw as top seed and wasted no time in reaching the semifinals without any real threat. Here, Kurera faced off against third seed Janali Manamperi who was also the finalist of the recently concluded SSC Open Tennis Championship.

After a grueling second set that was stretched to a tie breaker, Kurera pulled through to the final against Neyara Weerawansa who was seeded 4th in this tournament. Weerawansa had a noteworthy semifinal match against Savini Jayasuriya; 4/6, 7/6(8), 2/1 was the final score in favor of Weerawansa.

The final clash was also a slow starter with Kurera dominating the proceedings with a 6/1 win in the first set. Weerawansa put up a valiant fight in the second yet fell short in the tie breaker 7/5. Final scores read 6/1, 7/6(5).

The Men’s Doubles final was won by Chathurya Nilaweera and Thehan Wijemanne in a thrilling encounter between Yasitha De Silva and Dhilvan Herath. The former won the cup with scores of 7/5, 6/4.

Over in the Women’s Doubles, Anjalika Kurera and Neyara Weerawansa beat out Savini Jayasuriya and Janali Manamperi in a three setter. Final scores read 6/1, 1/6, 11/9 in the third set super tie break.