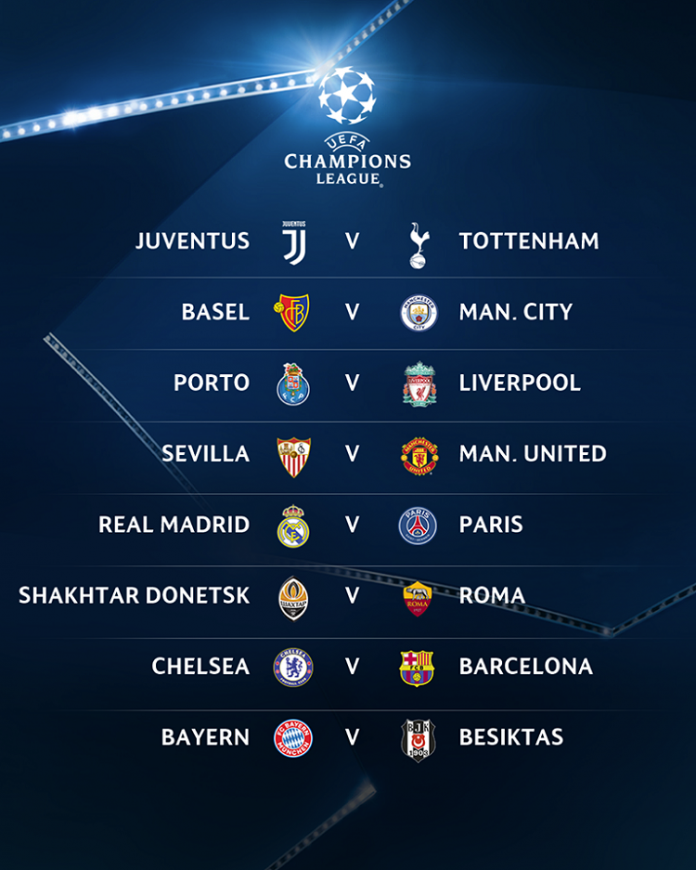 The knockout stage of the road to Kiev will kick off with a few big clashes happening after the UEFA Champions League last 16-draw took place on Monday (11th Dec).

This year’s group stage saw two major records being made in the UEFA Champions League. Real Madrid’s Cristiano Ronaldo became the first ever player to score in all the group stage matches. PSG broke the record for the most goals scored by a team in the group stage with 25 goals beating Borussia Dortmund’s previous record of 21 goals.

Juventus the first club to be drawn were paired against Tottenham Hotspur. Tottenham will be feeling confident after topping their group and beating the likes of Real Madrid while Juventus, last year’s runners-up, will be trying to right the wrongs of the last final.

FC Basel were paired with current Premier League leaders Manchester City who will be considered the favourites by many with their current unbeaten run in the English Premier League and having only lost one match in all competitions so far, this season.

FC Porto the two-time champions were drawn against Liverpool FC who finished off the final match of their group stage with a massive 7-0 victory over Spartak Moskva.

Sevilla FC will play Manchester United who lost just once in the group stages to FC Basel but with players like Paul Pogba, David De Gea and Zlatan Ibrahimovic to be coming back from injury, they should feel confident.

The 12 time Champions Real Madrid were drawn against PSG in what will be a huge game where players like Ronaldo and Neymar will once again go head to head, but with Real Madrid finishing only second in their group and PSG breaking the record for most goals in the group stages, could this draw be trouble for Real Madrid?

FC Shakhtar Donetsk will play AS Roma who topped their group beating Chelsea and Atletico Madrid.

Chelsea FC will play FC Barcelona in what will be a mouth-watering clash with Barcelona conceding just once in all the group stage matches this season while Chelsea scored 16 goals in 6 matches.

Besiktas will play Bayern Munich in what would be considered a one-sided draw but with Besiktas coming through the group stages undefeated it may be too early to write them off.