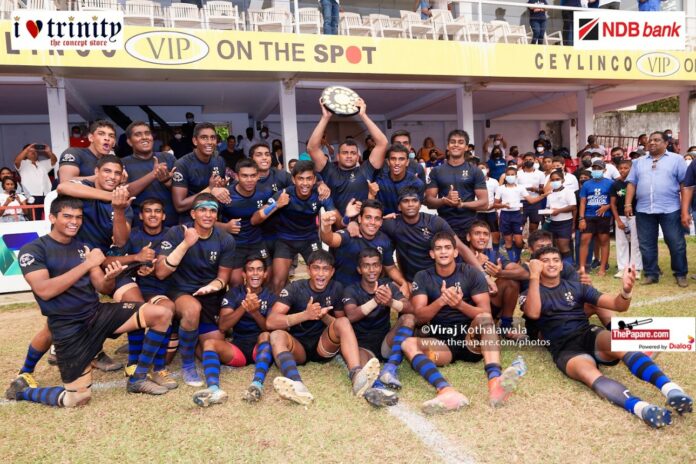 Trinity had the upper hand at the end of the first half, with the halftime score of 3-14 in their favour. S. Thomas’ College managed to come back strong in the second half to clinch the Cannon R.S. De Saram Shield with a slender lead of 17-14 after a game that had end-to-end action throughout the 70 minutes.

At the 8th minute mark, Trinitian Lithmal Moragoda was sent to the naughty chair due to a late charge on the Thomian fly half Yehan Bulathsinghala. The Thomians capitalized on this opportunity and managed to put on continuous pressure on the Trinity defense. Trinity, with the one-man disadvantage, cracked under pressure and gifted the Thomians a penalty 22m away from the try line. Yehan Bulathsinghala made no mistake in converting the penalty to put the first points on the board for S .Thomas’ College.

Trinity managed to switch the momentum back at the restart and dominated possession, which paved the way for Minidu Jayasundara to score the first try of the game. This was set up by a brilliant cross field kick by Thamuditha Dodanwatte, who added the extra two points to extend his team’s lead.

The Trinitians managed to dominate the first half of the game and extended their lead right at the brink of half time by scoring the second try of the game. Trinity flanker Asiri Kodithuwakku managed to steal the ball right out of his opponent’s arms after a messy line out and ran 40m piercing through the scrambled Thomian defense to score a brilliant try. Thamuditha Dodanwatte had no problem converting the extras for his team.

S. Thomas’ College, who were on the back foot in the first half, managed to turn the tables around right from the get go in the second half. The Trinitians were pinned in their half and were put under continuous pressure by the Thomians. Thomian centre Ovin Hettiarachchi spotted an opportunity 10 mins into the second half when he calmly intercepted the ball from the Trinity back line to score their first try. Yehan Bulathsinghala managed to close down the deficit by slotting the extras.

The Trinitians looked out of sorts in the second half and were put under more pressure when the substitute Ashen Wijesooriya was sent off for a dangerous on-air tackle.

Thomian scrum half Sakith Perera took the opportunity of the numerical advantage when he sniped through the Trinity defense and managed to earn a penalty 5m away from the try line. The Trinity defense were caught napping when the Thomian second-row Dunal Fernando took a quick tap and scored the try to snatch the lead off from Trinity.

Both teams were fighting hard during the final 20 minutes to seal off the game when the Thomian Skipper was penalised for a high tackle, and was given a yellow card at the 58th minute mark. Trinity substitute Loshika Wijekoon was lucky to get away with a yellow card after the assistant referee spotted him kicking the head of a Thomian who was on the ground.

At the final minute, Thidas Thanthirige, the number 8 of Trinity, was given a yellow card for his unruly behavior and for questioning the referee repeatedly, which was clearly evident throughout the game.