The Sri Lanka U-18 National Basketball Team will take wing to Bangladesh to compete in the South Asian qualifiers for the Asian Championship to be held in July 2016. Here’s a quick look at the composition of the team to take Sri Lanka over to the Asian stage.

Taher Akbrallay, a key component of the Asian International School team who are the defending champions of the All Island U-19 title will lead the team overseas. Playing in his final year, it is a fact that he is just exceptional. A player who loves to pierce into the defense by nature, he is a top-notch shooter who possess the ability to swish the nets from any given place on court.

Joining Taher is his team-mate from AIS, Arnold Brent. Brent is the younger brother of Clinton Thevakumar, who was part of the national team in 2015 where Sri Lanka was placed second in the South Asian region after a nail-biting final against India. A youngster who has the potential to be the successor to his brother is swift and agile enough to sneak through the defense.

Credit should be given to the selection committee with regard to the composition of the team as it appears to be an all-around unit, with players equipped with different abilities coming together which  will provide heavy ammo for Sri Lanka to ambush their opponents. 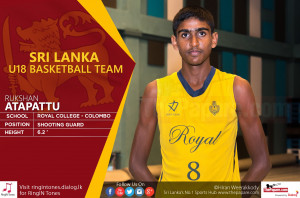 Royal College, runners-up of the All Island U-19 title sends Rukshan Atapattu for national duty. Rukshan, playing a forward position will be a good asset on offense as he is a player who uses his game sense together with his talent. Atapattu is good at his long range shooting which will help the team to swish the nets outside the line for three-pointers.

Darley Road lad Shivanka will be the sole representative from St. Joseph’s College. The Joes were the second runners up in the U-19 title hunt. Shivanka, who has been in business for quite a considerable time is an experienced campaigner, a talented cager and good rebounder. A player who puts his height and strength into maximum use, he is quick to grab the dirt ball and opt for the second chance or offload it back to the point guard to re-strategize.

The school by the sea, S. Thomas` College, who were placed fourth in the Under-19 title competition, contributes to the squad with two of their best products; Adrian Gunawardene and Shevan Perera. Both Adrian and Shevan are post players as well as defenders. Adrian also known as “AD” will be a handy asset in the offense as his mid-range jumpers just hoop through as you watch. 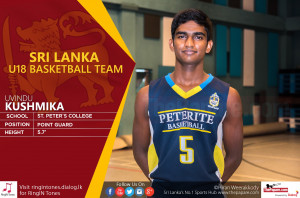 Hailing from St.Peter`s College Uvindu Kushmika will fill in another slot of the team card. Even though he was one of the top performers, unfortunately, the Peterites bid adieu in the quarter-final stage of the U-19 title conquest.  Uvindu, playing as a point guard excels in his ball handling and fancy moves. His brilliant footwork to beat defenders will be a treat to watch. Simply put, Uvindu can make defenders just mere spectators of the game.

Shenuka De Alwis and Dilruk Maithree filling another couple of slots will indeed provide a breather to the coach as he has rich options in every position to make his substitutions quite freely. The pair are proud products of Maristella College and Ananda College respectively.

Nimesh Kulatunga and Rashan Perera together with Chirath Matarage will fill the rest of the slots on the team card. Nimesh and Rashan hail from Lyceum International College, Wattala while Chirath is a product of Royal Institute, Colombo. 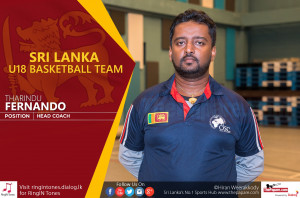 Tharindu Fernando will assume coaching duties as the head coach while Nerius Stanley will assist him. Tharindu who is the coach of Gateway College, Colombo is a veteran in the office. Most importantly, being an active coach in the school basketball scene he has seen all twelve players engaging in the sport. It will be an important asset for him as he constructs his gameplan as he will have precise knowledge on who does what the best way. 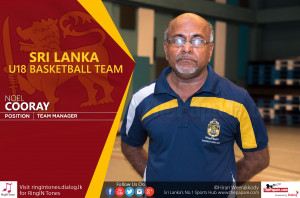 Team manager Noel Cooray will be in-charge of the administrative sphere of the team. Mr. Cooray who is also the General Sectary of the Schools’ Basketball Association has been an active member in the administrative area of the sport for more than a decade.

It will be interesting to see how the team will settle down with the weather and playing conditions overseas. But with this all around team and adequate preparations, Sri Lanka will be a top team.

It won’t be an easy task; it will be challenging but Sri Lanka can come out on top because it’s just

Twelve tip-top players; Two battle-scarred coaches; Together a shipshape contingent with one goal in their souls.

ThePapare.com wishes them the best!