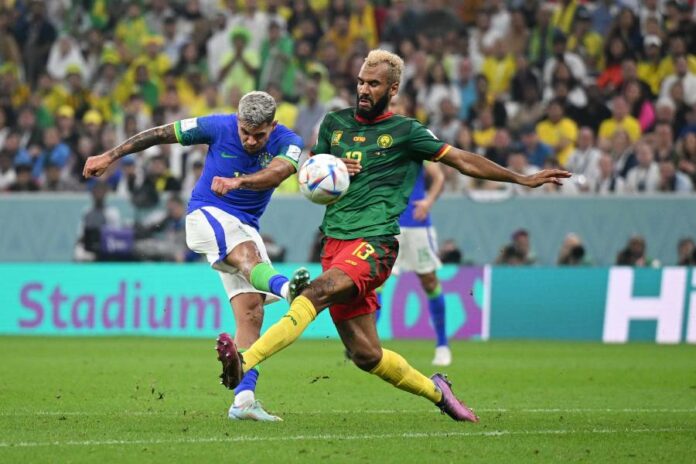 Cameroon scored in second half stoppage time to defeat Brazil, but the group’s other result means the Indomitable Lions are eliminated from the competition.
Cameroon v Brazil | Group G | FIFA World Cup Qatar 2022™ | Highlights
Watch the highlights from the match between Cameroon and Brazil played at Lusail Stadium, Lusail on Friday, 02 December 2022.

Brazil edge their way out of Group G as group winners, while the result – though a fantastic one – spells the end of the road for Cameroon.

With the group’s other game ending in a 3-2 win for Switzerland over Serbia, Cameroon’s four points are not enough to see them advance. But the result will nonetheless live long in the memory of Cameroonians and weigh heavily on the mind of Brazil coach Tite.

The first half passed relatively without incident – possibly as Brazil, who only needed a point to be sure of progression, were able to dictate play and looked reluctant to expend too much energy. While Gabriel Martinelli and Rodrygo looked lively and Antony had some joy down the right-hand side, the Brazilians had little to show from their first 45. After the break, Cameroon seemed to use the chance to create momentum. Vincent Aboubakar pulled a shot narrowly wide of Ederson’s post as the Cameroonians grew in confidence and urgency. Martinelli produced the first real moment of magic of the second half, however, striking a curling and dipping shot at Epassy, who lept to flip the ball over the bar. From the resulting corner, Eder Militao swung a leg at a loose ball forcing Epassy into another save – the goalkeeper spilled the ball, leaping back towards his line to prevent an embarrassing goal.

But it was to be Cameroon who would open the scoring, with Vincent Aboubakar guiding in a sumptuous header in stoppage time and picking up a second yellow card for pulling off his shirt in celebration.

Martinelli and Bruno Guimaraes missed late chances to equalise, but Brazil progressed as group winners all the same to face Korea Republic in the round of 16.

Key moment: A goal and gone for Aboubakar

It was a moment of sheer footballing beauty – the cross from Jerome Ngom Mbekeli a perfect one; the header from Aboubakar a piece of magic.

Cameroon had threatened throughout the second half, but few would have anticipated Brazil giving their star striker a clear run at goal and free header. That is to be harsh on Aboubakar, perhaps, as the header still had to be composed and accurate. It was everything it needed to be.

The fact he was sent off for his celebration – a second booking for taking his shirt off – could perhaps make it even more memorable.

As it turned out, it wasn’t such a Crazy Dream.

Under My Control | Dani Crazy Dream
Dani joins his boyhood football club in Brazil and wins a trophy, but things won’t end as he expected.