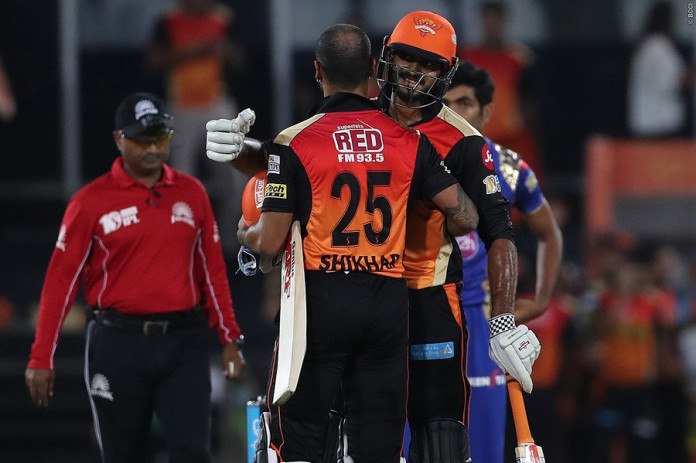 The win was set up by the Sunrisers’ bowlers who restricted a formidable MI line-up to 138-7, after which the home team’s batsmen chased down the required runs quite comfortably. SRH got across the line in the nineteenth over, winning the contest by 7 wickets.

Earlier in the evening, the MI captain Rohit Sharma called correctly at the toss and decided his batsmen would take first strike. But the visitors never really got the wheels rolling in their innings thanks to some extremely disciplined bowling by the home team’s bowlers. After a quiet first over from Bhuvneshwar Kumar, MI lost the opener Lendl Simmons in the second when he tried to break the shackles but had his stumps shattered while attempting to heave through the leg-side. Parthiv Patel and Nitish Rana collected a six and two boundaries respectively – off Mohammed Siraj – in the third over, in what would be the most-expensive over of the match.

Rana was dismissed in the fifth over when he miscued a pull and was caught at mid-off, while Parthiv (23 from 17 balls) was dismissed just after the powerplay when he holed out to long-on. With MI in trouble, having slipped to 36-3, Rohit Sharma, who had a highest score of 24 in nine previous matches against Sunrisers Hyderabad, chose the day to score his first half-century against them.

Rohit took time to get going, but he found the boundary every time the bowlers made an error; in the ninth over, he pounced on width offered by Rashid Khan and collected a boundary through point, in the eleventh he deposited one from the leg-spinner into the stands at long-on. After cutting Bhuvneshwar Kumar to the point boundary in the thirteenth over, Rohit then got stuck into Moises Henriques, hitting the Australian for three boundaries in the fourteenth over. The MI captain brought up his half-century in the sixteenth over- getting there off 34 balls. He then collected a boundary off Siraj and a six off Bhuvneshwar Kumar. Rohit was eventually dismissed for 67, when he attempted to pull a short delivery from Siddarth Kaul, but only succeeded in dragging the ball onto his stumps; he hit 6 fours and 2 sixes in his 45-ball outing.

The MI skipper found good support in Hardik Pandya, who batted at number five in this match. Together the fourth wicket pair added 60 runs and helped resurrect the innings. Hardik struggled for timing – and was particularly at sea against Rashid Khan; he made 15 and could not find the fence once in his 24-ball outing. Hardik was dismissed in the fifteenth over with the score at 96 after 14.2 overs. MI could only add a further 42 runs in the remaining 5.4 overs to finish at a below-par 138-7.

For the home side, the two Afghan players were brilliant. Mohammad Nabi was handed the challenge of bowling with the new ball, and he responded brilliantly by finishing with stunning figures of 4-0-13-1 – that despite bowling three overs in the powerplay period. Rashid Khan returned with economical figures of 1/22. Bhuvneshwar Kumar added two more wickets to extend his tally at the top of the season’s wicket-taker’s list, while Siddarth Kaul – who bowled three overs in the middle period and one over at the death – returned with figures of 3/24; Kaul’s scalps included that of Rana, Parthiv and Rohit.

David Warner displayed his aggressive intent by attempting a reverse sweep first ball of the chase. The SRH skipper collected a boundary through point second ball to get the chase underway, but was trapped leg before wicket by a Mitchell McClenaghan inswinger in the second over.

Shikhar Dhawan and Moises Henriques then snatched back the initiative with an aggressive 91-run partnership. The pair had scored four boundaries in total in the first six overs and helped their team to 43-1 at the end of powerplay. After the powerplay, despite the field being spread out, the left-right pair didn’t take the foot off the gas and continued to collect boundaries frequently; if Dhawan was harsh on the spinners – collecting two sixes and a boundary off Karn Sharma and a boundary off Harbhajan, Henriques was severe on the pacers, collecting two boundaries in a Hardik Pandya over and two more off Lasith Malinga.

Man of the Match: Shikhar Dhawan