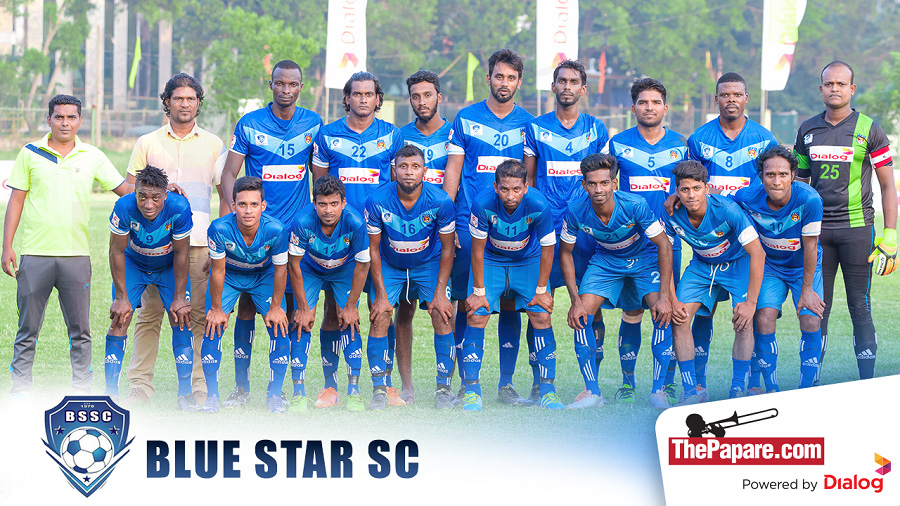 Blue Star SC hail from the football crazy town of Kalutara and became the only team based South of Colombo to win the top division when they clinched the title in 2003/04.

Most recently the club has been on the ascendency yet again and emerged runners up in the 2014 & 2015 FA Cups, losing the final to Army SC and Colombo FC respectively. The team has a great fan following in the South and has the players to beat any team on their day.

Blue Star SC had a solid but unspectacular campaign in 2015, qualifying for the Super 8s only to finish 2nd from bottom when it really mattered. They played well in the group stages, registering 5 wins, 2 draws and 2 losses.

However they were found to be out of their depth in the Super 8 stage, failing to register a win and ending up with 4 draws and 3 losses. Their FA Cup campaign was another disappointment as well and saw them make the Quarter Finals, only to lose 1-0 to Saunders SC.

Blue Star SC started the 2016 campaign without a regular coach and had an inconsistent season in a rollercoaster of a campaign.

What started with a 1-0 win over Colombo FC quickly disintegrated to the lows of a 6-0 loss to Army and a 1-0 loss at home to Matara City FC.

Blue Star ultimately sealed their place in the Super 8 stage in the final game week, courtesy of a crucial 2-0 win over Solid SC at home.

Speaking to ThePapare.com regarding this season, skipper Manjula Fernando had this to say,

“We started the season without a coach, with the senior players taking responsibility for the team. Especially after the loss to Matara City, the team galvanized together to achieve the goal of reaching the Super 8s. Our coach was a great strength to us as well along with our spectators who always have our backs.”

Former National goalkeeper and Skipper of Blue Star, Manjula Fernando has been a leader on the field, organizing his defence and making important saves throughout the season.

He has been aided in keeping the goals out by lanky center back Nasiru Opayemi who has been one of their most influential players this season. Opayemi has been solid at the back and a threat from set pieces with his height being a real nuisance for opposition defenders inside the box.

Idowu Hameed has been the top goal scorer for Blue Star, converting some pressure penalties along the way. The midfielder is good going forward and has proved to be a key figure for the team in the middle of the park.

There has been much debate about E.B. Channa’s lifestyle and behaviour off the football field, but there can be no debate as to the value he adds to this Blue Star team. The experienced forward has been a consistent performer in Kalutara over the past two years and will be key for them going forward as well.

Speaking to ThePapare.com, coach Karunaratne had this to say on his experience at Blue Star thus far,

“The team and management have supported me since I took over. We have been working on our finishing which was one area I identified that needed improvement. We were motivated to reach the Super 8 stages and were in good spirits before the final game of the season and our supporters ultimately helped us over the line. We have a squad of experienced players and I look forward to making some more improvements in preparation for the Super 8 stage.”

Blue Star SC have the talent to do well in the Super 8s, but it is the consistency, especially in defence, that has been lacking throughout the season. They go into the Super 8s with a lot of momentum but will likely find it difficult to cope against teams that play on the counter.

You have to be in it to win it, and Blue Star have found a way against all odds to drag themselves into the Super 8 stage, and though a mid table finish is most likely, there will be more than a few hearts in Kalutara that will believe this group of players can go all the way.