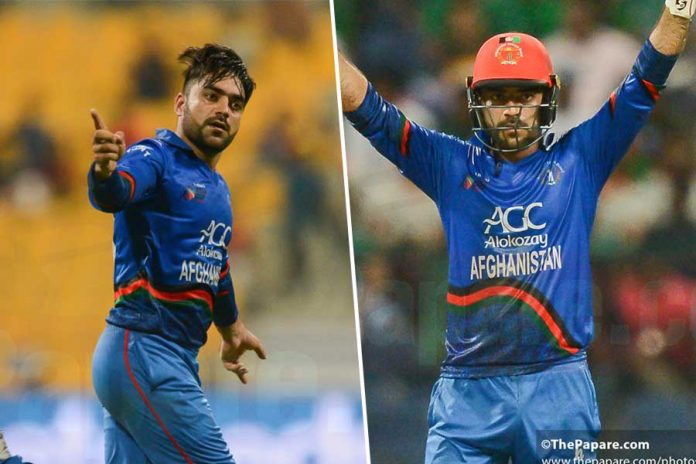 A rapid half-century and 2/13 from Afghanistan’s no-longer-teen sensation Rashid Khan saw his side canter to a 136-run win over their more established counterparts.

Indian all-rounder Ravindra Jadeja is in line to make his ODI..

If anything has surprised about Afghanistan’s performance in the Asia Cup so far, it is the lack of shock their comprehensive defeats of Sri Lanka and Bangladesh have elicited. So far have the progressed and so quickly do they continue to progress that they are already entering matches against fully established teams as at least equal favourites.

That is not to say they had everything their own way today. Indeed, as debutant Abu Hider’s superb new ball spell reduced them to 28/2, they found themselves on the back foot. If the first wicket came with a hint of fortune, Ihsanullah flaying Hider’s fourth ball in ODI cricket, a long-hop, straight to cover, the second was all skill, the ball going on with the arm to peg back Rahmat Shah’s off stump.

Mohammad Shahzad and Hashmutullah Shahidi then put on a repair job, adding 51 for the third wicket. The former played with notable sense, but could only restrain himself for so long. Three boundaries in four overs hinted at a change in tempo, but after hitting the third of those Shahzad tried for a first six, and only found long-on.

That was the first of four wickets of Shakib Al Hasan, who almost won the game for Bangladesh through the middle overs as Afghanistan slipped to 160/7. Captain Asghar Afghan and Samiullah Shenwari were both dismissed in similar fashion, bowled attempting a big shot having become bogged down. They made a combined 26 from 47 between them.

Shahidi was next to go for a well-constructed, patient 58. He tried to run the ball down to third man but was cramped for room and only edged Rubel Hossain to the keeper. By the time star all-rounder Mohammad Nabi was pinned in front by Shakib, Afghanistan were in danger of being dismissed for a sub-200 score.

That reckoned without Afghanistan’s two other all-rounders, Gulbadin Naib, firmly established in the role, and Rashid, who justifies the tag more each day. They added a national eighth-wicket record 95 in 9.1 overs, and helped Afghanistan to an eventually match-winning 255/7.

Gulbadin was no slouch, and got the assault started with two boundaries in two balls off Hider, both pulled through the leg-side. But Rashid was a revelation, and for the most part, the senior partner was just content to give the youngster the strike.

There was fortune – one boundary was top edged through fine leg, another couple just evaded fielders – but there was also sublime hitting, including a gloriously timed swing over midwicket.

By the time he plundered 18 runs off the last five balls of the innings, the momentum had swung decisively towards Afghanistan, especially considering the potency in their bowling line-up. Those bowlers set about their work with gusto, and Bangladesh never looked like mounting a challenge.

Aftab Alam and Mujeeb Ur Rahman kicked things off with metronomic new-ball spells. The latter, a teenaged mystery spinner with the control that makes variations lethal, has already caught the eye of franchises worldwide.

The former, only bowling skiddy medium pace, may never rake in the T20 deals, but first in Ireland and now here, he’s shown his seamers can complement Afghanistan’s bevy of spinners perfectly.

Each struck once in their opening spells, and neither conceded a boundary throughout. Mujeeb enticed Nazmul Hossain Shanto into ballooning a leading edge to point before Aftab found some mean inswing to pin Liton Das in front, with not even a review able to save him.

Bangladesh continued to lose wickets regularly – there were only two ducks but a high score of only 32 from Shakib – as Afghanistan swarmed all over them. It was a true team performance – no one stood out because everyone did, and there was nothing approaching a weak link. Six bowlers struck at least once, no one did so more than twice, and no one conceded more than a single boundary.

Gulbadin can be credited with ripping the heart out of Bangladesh, having Mominul Haque caught down the leg-side and bowling Mohammad Mithun off the inside-edge. Bangladesh were 43/4 and in danger of utter embarrassment, before Shakib and Mahmudullah restored some calm.

They were becalmed as well as calm however, and the run rate stalled. Rashid, who conceded just 13 off his nine overs, had much to do with it, and he dismissed both men, Shakib first, flummoxed by a faster one, and then bowling Mahmudullah with the googly.