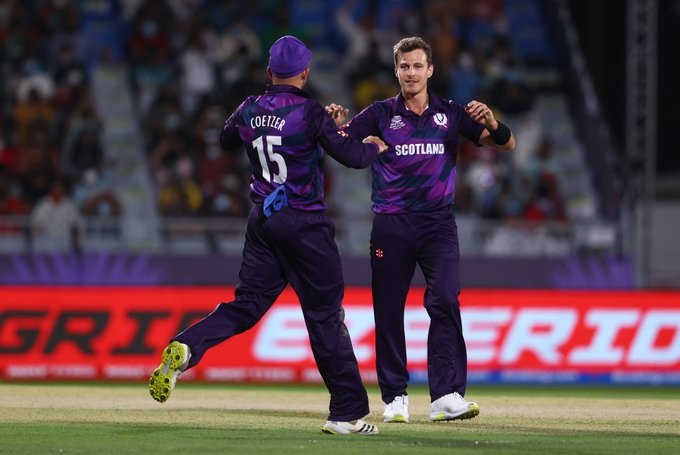 Playing in just his second international, 31-year-old Chris Greaves was the star of the show with the bat and ball as Scotland beat Bangladesh by six runs in the second game of Round 1 of the ICC Men’s T20 World Cup 2021.

In their first game of the tournament, Scotland scripted an outstanding comeback to put two points on board in the Group B game against Bangladesh.

Scotland, who were 53/6 after 12 overs, fought back strongly to put up a challenging target of 141 for Bangladesh on the back of a 51-run stand between Chris Greaves and Mark Watt for the seventh wicket.

With the ball, Bangladesh were always behind the eight ball as Scotland bowled brilliantly to keep The Tigers at bay. In the end, the asking rate was too much for the lower-order batters as Scotland put two points on the board with a six-run win.

Scotland needed early wickets if they were to stop Bangladesh from cruising in their chase. Soumya Sarkar was the first batter to make the long walk back after flicking the ball straight into the hands of deep mid-wicket. Two overs later, Liton Das tried to take the aerial route but once again found Munsey at mid-off.

The Scotland bowlers managed to keep a lid on the scoring as Bangladesh went without a boundary for six overs. Mushfiqur Rahim finally broke the shackles with two sixes in two balls off Leask as The Tigers went into the drinks break at 59/2.

After bailing out of trouble with the bat, Greaves turned the game around with the ball in hand with two quick wickets.

With the required rate climbing, Shakib and Rahim had to up the scoring and in their bid to do so, lost their wickets at a crucial juncture.

Luck was on Greaves’ side as a Shakib failed to put away a half-tracker and hit it to Calum MacLeod who completed a good running catch on the boundary. In his very next over, Greaves got his second as the experienced Rahim lost his wicket playing all around a pre-meditated ramp shot.

Earlier, Bangladesh won the toss and opted to field against Scotland in the second game of the ICC Men’s T20 World Cup 2021.

Bangladesh’s decision to go with an extra pacer reaped rewards right away. Mohammad Saifuddin struck early, after Taskin Ahmed and Mustafizur Rahman kept a leash on Scotland’s scoring. Skipper Kyle Coetzer had no answer to Saifuddin’s inch-perfect yorker and had to walk back without scoring.

George Munsey and Matthew Cross consolidated the innings and then made full use of the fielding restrictions, scoring 23 in the last overs of the Powerplay.

Scotland lost their set batters in quick succession as Mahedi Hasan made an immediate impact after being brought into the attack. He first trapped Cross in front of the stumps before knocking over Munsey with an arm-ball.

Two overs later, Shakib Al Hasan added yet another feather to his cap. He levelled Lasith Malinga for most wickets in Men’s T20Is with the scalp of Richie Berrington before surpassing the Sri Lankan pacer two balls later with the wicket of Michael Leask.

Scotland were staring down the barrel at the end of the 12th overs before Chris Greaves and Mark Watt bailed them out of trouble. Going at well below six runs per over, Greaves and Watt upped the ante and kept finding the boundaries.

After taking the team past the 100-run mark, they brought up the 50-run partnership in just 33 balls with a boundary. After Watt’s dismissal, Greaves took the attack to Taskin Ahmed with two fours and a six off the next three balls.

Mustafizur Rahman got rid of Greaves and Josh Davey in the final over to ensure Scotland don’t end their innings with a flourish as they finished on 140/9.

Scotland next face PNG on Tuesday, October 19, while Bangladesh take on co-hosts Oman in the second match of the same day.