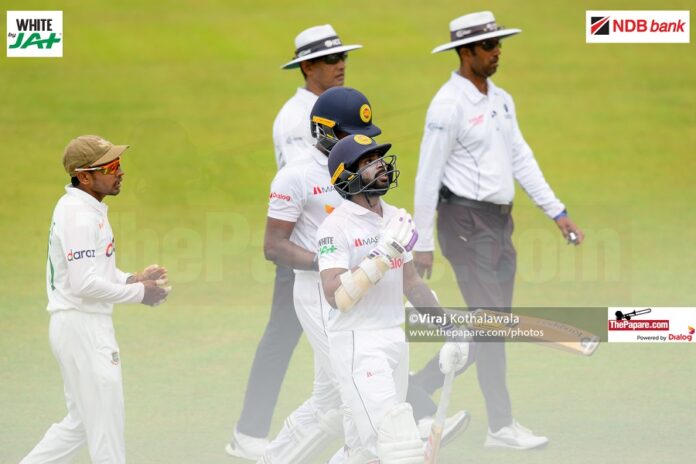 Niroshan Dickwella and Ramesh Mendis made 87 for the 7th wicket to rescue Sri Lanka from a bit of trouble as the hosts lost 5 wickets for 69 runs midway through day 2.

While the batsmen ahead of him seemed to have prioritized occupying the crease ahead of getting runs on the board, Dickwella showed clear intent to swing momentum back in Sri Lanka’s favour, coming in at the fall of the 5th wicket.

The left-hander was not afraid to take a few risks and brought out a few upper cuts and sweeps as he scored a brisk half-century, adding 87 alongside all-rounder Mendis. The wicket-keeper batsman has had a good year with the bat, with 426 runs to his name in 2021, including two near-misses on a maiden Test Century.

Oshada Fernando and Lahiru Thirimanne started off cautiously against some good bowling from the Bangladeshi quicks, showing little intent to push the run-rate up and gain some momentum early in the day. The ploy didn’t really work for the pair as Thirimanne fell for 140.

It was much deserved breakthrough for Taskin Ahamed and the lanky right armer could have had a wicket soon after but everyone on-field seemed to miss Angelo Mathews’ nick behind to the keeper in the same over. If the dismissal had stood, it would have been just the 3rd duck in Mathews’ career.

Taskin got his revenge a couple of overs later however and when Tailjul Islam got rid of Dhananjaya de Silva with some extra bounce, Sri Lanka really began to sweat.

Pathum Nissanka and Fernando dug in for the next 24 overs before Nissanka fell to a ball that seemed to keep low off a good length. Fernando soon followed, putting Sri Lanka in some trouble at 382/6. Nissanka’s dismissal seemed to indicate that there was some variable bounce in the surface, which could make for interesting viewing as the Test goes on.

The Bangladesh bowlers had perhaps one of their best sessions in overseas Tests this morning, picking up 3 wickets for just 43 runs to wrest the initiative from Sri Lanka somewhat. The fast bowlers, Ahamed in particular, was impressive, bowling a disciplined line and length which eventually paid dividends.

Ahamed should have had a 5 wicket haul, with two catches going down off his bowling (Karunaratne on day 1, Mendis before the close of play on day 2), but was certainly the one to lead the attack on a track that seemed to have suddenly come to life for the bowlers.

At stumps on day 2, Sri Lanka still held the upper hand, with 469 runs on the board for the loss of 6 wickets, with Dickwella (64*) and Mendis (22*) well set. With bad light and rain expected to continue to play a part in the game, it would be interesting to see what Sri Lanka’s tactics would be, going into day 3.