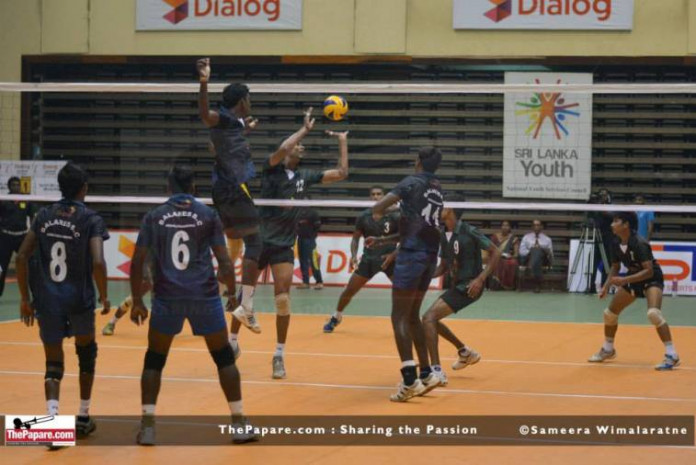 Trashing away United Sports clubs within the fourth quarter of the game Balasara sports club walks away with an easy win in the men’s final at President Gold Cup.

With much competition rising up to the finals after thousands of matches, the finals were extremely tight. As the players of the two teams entered they were tensed and the warm ups itself was intense carrying on for long minutes. With the arrival of the chief guest, Hon. Mahindhananadha Aluthgamage, Minister to the sport ministry, the play kicked off.

Second quarter was intense with both teams calling for technical timeouts. The game plan was visible and changed a couple of times. At times the solution were very advantageous, for example the strong immediate blocks to dashes, didn’t apply to the context of this match with both teams being extremely experienced in the game. Yet the end result didn’t change much in advantage for United sports club instead the final score of the second quarter went down at the end: 15 – 25 in favor of Balasara sports club.

The third quarter finally changed the game for United sports club, but they had to struggle to earn the game. The battle was close, even referees themselves doubted the decisions. With lightning speed strikes following the chief referee had to refer to line referees before the final decisions were made. Ironically, with much effort United Sports club was able to win the third battle with a strikingly high  point gap, same as Balasara sports club’s victory in the last quarter. This turn was also 25 – 15 but with United sports taking the lead.

With a huge comeback from their loss in the previous quarter Balasara Sports club was ambitious to win the fourth quarter and secure their win early on. Yet after the victory at the third quarter, even United sports club was making a strong attack. Finally the game wrapped up just with a 3 point difference Balasara Sposrts club winning the overall championship of the President Gold Cup.