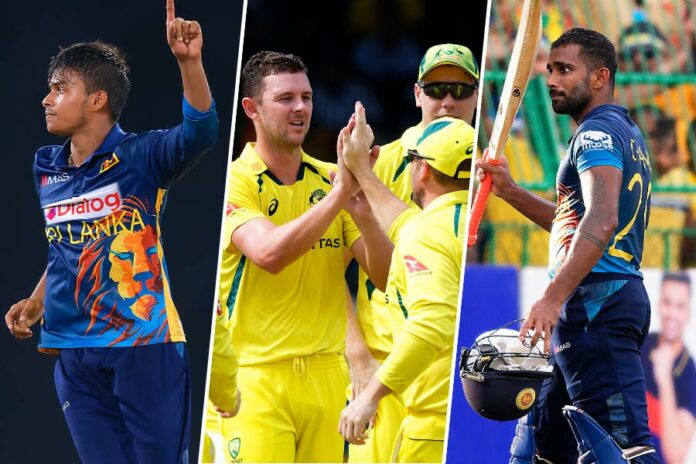 Australia registered a 4-wicket win over Sri Lanka in the fifth and final ODI match at the R. Premadasa International Stadium on Friday.

After opting to bat, Sri Lanka were bundled out for 160, losing their first 7 wickets for just 62 runs. All-rounder Chamika Karunaratne registered his best score, a gritty 75 to take Sri Lanka’s total to relative respectability.

Australia got off to a dismal start in their run-chase as Aaron Finch was caught at slip off Maheesh Theekshana, soon after which danger man David Warner was caught brilliantly by Danushka Gunathilaka at mid-off. The visitors were in dire straits at 19 for 3 when debutant Josh Inglis was caught off Theekshana. However, Mitchell Marsh and Marnus Labuschagne, somewhat resurrected the innings adding 31 for the 4th wicket.

Labuschagne was involved in another crucial 51-run stand for the 5th wicket before Wellalage came back to claim two scalps in his final few overs. Wicket-keeper batter Alex Carey was the difference in the end, remaining unbeaten on 45 off 65 deliveries. All-rounder Cameron Green batted till the end with a fine, 25 not out to complete the chase.

Earlier, the hosts made three changes to their side from the 4th ODI. Niroshan Dickwella, Wanindu Hasaranga and Dhananjaya De Silva were replaced by Danushka Gunathilaka, Dinesh Chandimal and debutant Pramod Madushan.

Josh Hazlewood and Pat Cummins removed the Lankan top order – Nissanka, Gunathilaka and Chandimal inside the first powerplay. Kusal Mendis and Charith Asalanka looked like they were in good nick but an unfortunate run-out ended the innings of the latter.

Mendis was hit-wicket for the 2nd time this tour as Sri Lanka slipped further. Left-arm spinner Mathew Kuhnemann removed young Dunith Wellalage and skipper Dasun Shanaka as the hosts were reeling at 62 for 7.

Karunaratne along with Jeffery Vandersay commenced the repair work for the Sri Lankan innings. After Vandersay was dismissed with the score on 85, Karunaratne along with the debutant Pramod Madushan added 58 runs for the 9th wicket, which is also the second-highest 9th wicket stand against Australia in ODIs, to give some respectability to the score. Right-handed Karunaratne smashed 8 fours and 2 sixes during his commendable run-a-ball knock.

Teenager Wellalage ended as the highest wicket-taker in the series, with 9 scalps in 5 games while Kusal Mendis walked away with the Man of the Series award for his aggregate of 249 runs.

Despite the loss in the final game, Sri Lanka fought valiantly, a characteristic which defined their 3-2 series win. The teams will now move to Galle for the two-match Test series, which begins on the 29th of June.