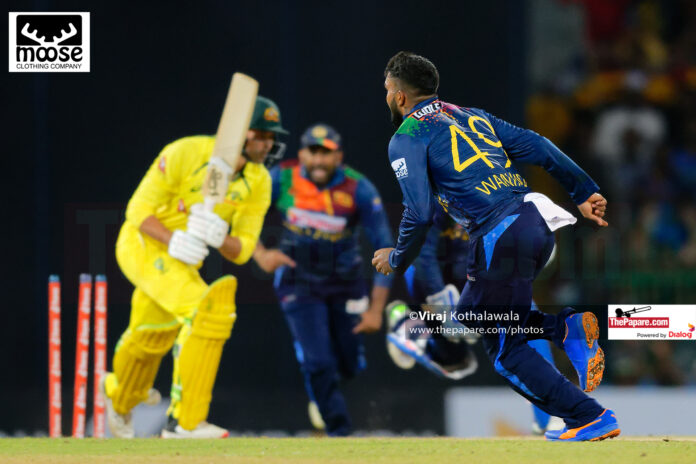 Australia sealed the three-match T20I series with a game to spare beating Sri Lanka by 3 wickets in a low scoring, thriller played at R. Premadasa Stadium on Wednesday.

Sri Lanka’s spin magician, Wanindu Hasaranga produced a stellar bowling effort, picking up 4 wickets for 33 runs to make a game out of a paltry 124 set by the failing batting unit.

Less than 24 hours after being demolished by the Aussies, the hosts, Sri Lanka needed to make a strong comeback to level the series and take it to a decider in Pallekele. However, the batting unit failed to put away the disciplined Australia bowling attack with the Richardsons – Kane and Jhye sharing 7 wickets between them.

After being asked to bat, Danushka Gunathilaka holed out at deep mid-wicket off Glenn Maxwell before Pathum Nissanka sliced it straight to third man off Jhye Richardson as the hosts went down to 2 down for 7. In-form Charith Asalanka and Kusal Mendis added 66 runs for the 3rd wicket to consolidate the Lankan innings.

Asalanka, top scored with a 33-ball 39 but his dismissal put the brakes on the Lankan scoring rate. Mendis was dismissed in an unfortunate manner – hit wicket as Sri Lanka crumbled to 4 down for 90. The rest of the middle order batters – Bhanuka Rajapaksa, Dasun Shanaka and Hasaranga could not push on in the final few overs as the hosts lost the plot with the bat once again. Incidentally, Australia did not concede a single extra in their bowling effort.

Chasing somewhat a similar target like in the first T20I, the visitors started off strong with skipper Aaron Finch and David Warner going hard at the Lankan bowlers.  Wanindu Hasaranga, having been asked to bowl the third over of the innings, got the prized scalp of Finch. Two overs later, he trapped Mitchell Marsh plumb in front to script a dramatic comeback for the hosts.

Steve Smith was adjudged LBW off slinga Nuwan Thushara and then a mishap between Warner and Maxwell reduced the visitors to 64 for 4, giving plenty of hope to the sell-out crowd. Marcus Stoinis fell to the bowling of Dushmantha Chameera as Australia slid further.

Hasaranga removed the dangerous Maxwell and Ashton Agar in consecutive deliveries as Australia went down to 7 down for 99. Sensing an opportunity to close out the game, Sri Lanka bowled out their best bowlers. However, the calm and composed Matthew Wade and Jhye Richardson played out the rest of the part-time spinners with an unbroken 27 runs for the 8th wicket to take Australia home.

The third and final T20I will be played on the 11th of June in Pallekelle.