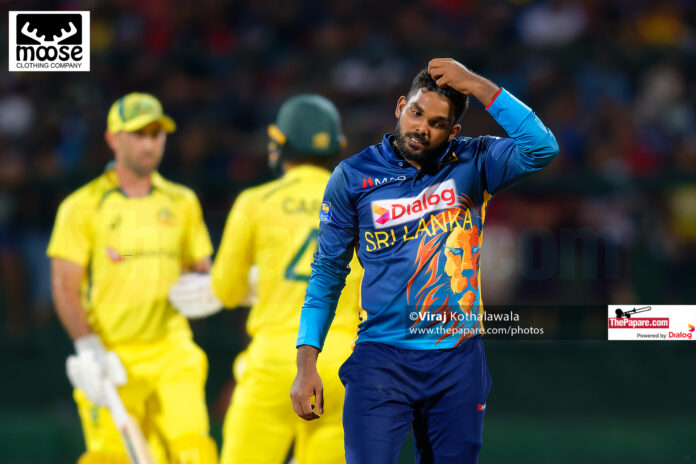 Glenn Maxwell made 80 off 51 deliveries to deny Sri Lanka a win in the 1st ODI at the Pallekelle International Cricket Stadium after Wanindu Hasaranga had shone with both bat and ball.

Maxwell’s innings included 6 fours and 6 sixes, a phenomenal innings given the situation of the match when he came in. Batting at 7 tonight, he played the leading hand in partnerships with Alex Carey, Ashton Agar and ultimately Jhye Richardson, calmly taking the Aussies home, with 9 balls to spare.

Australia’s chase of 301 started off poorly, as they lost David Warner for a duck, but steady contributions from pretty much the entire batting order meant that they were never really out of it, even when they were set a stiff revised target of 282 in 44 overs following an hour-long rain delay.

The rain was perhaps a turning point in the game as the resumption of play saw the ball getting harder to grip for the local bowlers, who had banked on their 4 spin-bowling options to do the bulk of the work.

The bowlers kept picking up wickets, but Australia still managed to keep scoring at around the 6+ runs an over mark, making their job easy the closer to the end things got.

Wanindu Hasaranga was the star with both bat and ball for the Sri Lankans, registering a career-best 4/58 in his 9 overs after his 19-ball 37 had helped push Sri Lanka’s total to 300.

Debutant Danish Wellalage did not start well, but picked up Steve Smith and Ashton Agar at crucial junctures of the game, giving some support to Hasaranga. Theekshana was uncharacteristically expensive; he was perhaps the most affected by the difficulty in gripping the ball due to the rain.

Earlier in the day, the hosts’ openers got off to a slow start, especially Nissanka, who struggled to get off the blocks, at one point struggling on 7 off 25 deliveries. 3 boundaries off Pat Cummins in the 9th over saw the right-hander finally find some rhythm as he went to his half century in 61 deliveries while Gunathilake followed soon after at a much quicker rate.

The pair put on 115 for the 1st wicket, before chancing the deadly arm of Marcus Stoinis in the deep. Gunathilake was caught short despite a full-length dive, giving the visitors a wicket out of nowhere.

Nissanka followed soon after as did Dhananjaya de Silva, who fell victim to a brilliant one-handed catch by David Warner.

Australia blew hot and cold in the field, with Warner taking another brilliant catch to dismiss Dasun Shanaka later in the innings, while also conceding a number of overthrows and committing misfields.

The batters took their time getting in, keeping Sri Lanka’s dot ball percentage constantly in the 50-55 range.

Mendis took his time, but launched after getting to his half century, smashing his last 36 runs in 28 balls.

Australia went into the game with just the 1 frontline spinner in Ashton Agar and with the pitch showing wear and tear right from the start of the game, had to use Glenn Maxwell and Marcus Labuschagne. The former went for runs, but Labuschagne did the job in the death, picking up two key batters in Shanaka and Chamika Karunaratne.

Coming into the last 2 overs, Mendis was sitting on 85, on the verge of getting to his 3rd ODi ton, but 5 consecutive fours by Wanindu Hasaranga and a brilliant last over by Josh Hazlewood saw him unfortunately miss out.

Sri Lanka won’t be complaining though, as Hasaranga’s brilliant charge at the end saw Sri Lanka go from looking like they would finish in the 275-280 run range to the 300-run mark.