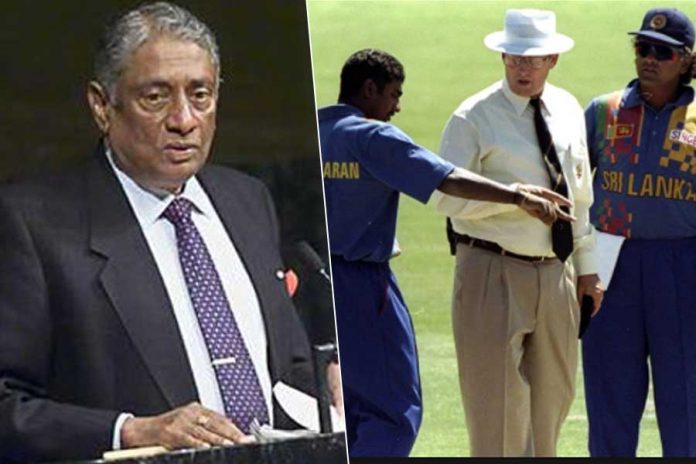 Australian cricket is at its lowest ebb since the Packer era of 1970s. A culture built by Allan Border to win at all cost more than a quarter-century ago has snowballed into players stretching the boundaries and Cricket Australia has been left with no alternative but to put its foot down and suspend their two best players.

Sri Lanka’s acrimonious tour of Australia in 1995 is a case in point as to what levels the Aussies would stoop to in a bid to achieve their means. They didn’t believe in the adage that the end doesn’t justify the means. They called Murali for chucking even when he bowled a leg-break. 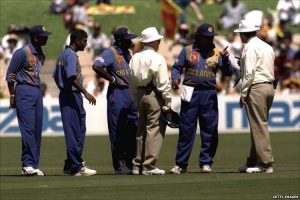 Sri Lanka didn’t take a backward step either. It helped that the team was lead by a combative captain in Arjuna Ranatunga. He was backed by the board but, we know little of the role, the Foreign Minister, the late Lakshman Kadirgamar played in the whole episode. Mr. Kadirgamar’s message to the Board of Control for Cricket was clear, ‘don’t be bullied by the Aussies’.

The Central Bank bombing that killed nearly 100 people in 1996 was a bitter blow to country’s economy. The blast had happened just a fortnight before the 1996 World Cup and Sri Lanka’s chances of hosting the event was in jeopardy. It is to Foreign Minister Lakshman Kadirgamar that Board President Ana Punchihewa turned. Promising safety for the visiting teams, Kadir assured that the players will be accorded security provided to a Head of State.

Australia were in no mood to come to Colombo and were hard to convince. Shane Warne’s statement that a bomb might go off in Colombo when he is shopping was a killer blow to country’s tourism. Kadirgamar was an angry man. When the press asked him for a response to Warne’s comment, he said, ‘shopping is for sissies.’  At that point, all hell broke loose. 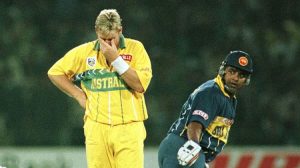 There was a storm of protest in Australia. The Australian Foreign Minister was drawn into the fray and diplomatic relations between the two countries were stained. In order to cool things down, Kadir sent a bouquet of flowers to his Australian counterpart Gareth Evans. When a journalist asked him about this he said, ‘flowers are also for sissies!’

When Kadir visited Australia, a television reporter asked him whether he had played any cricket. The Foreign Minister informed the reporter that he had played before the journalist was born – without helmets and thigh guards, on matting wickets that were full of holes and stones, and that he had his share of broken bones to show for it.

A Trinity Lion, Kadir played many sports captaining cricket and athletics and playing rugby. He was a father figure to Arjuna and they used to discuss cricket at length. It was he who kept on reminding Arjuna that the position of national team’s captain is the most prestigious one in Sri Lanka. “People all over the world don’t know who Sri Lanka’s President or Prime Minister is. But they do know who Sri Lanka’s captain is,” Kadir told Arjuna. “Always remember that you can inspire a lot of people,” was his greatest advice to Arjuna.

Kadir also played a crucial role in saving Arjuna when the second chucking controversy happened in 1999. It was he who advised the board to employ the best of lawyers to save the captain who was facing a lengthy suspension. 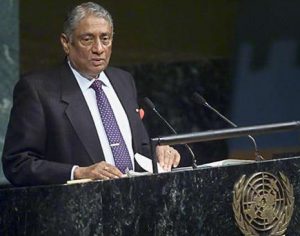 “I remember vividly the incident that occurred in Australia when Murali was called for throwing and Arjuna led his team to the boundary, in protest, but cleverly refrained from crossing it. I was watching TV in Colombo. As a past captain, I asked myself what I would have done in Arjuna’s place. In my mind, I had no hesitation in supporting his decision. A few minutes later the phone rang. The President of the Board called to ask for advice. I said Arjuna was right because a captain must, on the field, stand up for his men and protect them, but the consequences must not be allowed to go too far; good lawyers must be engaged and a reasonable compromise must be reached. That was done,” Kadir recalled several years later.

The Australian government, in a bid to calm the tensions down, invited Kadir to visit Australia during that tour. Alexander Downer had succeeded Evans as the Foreign Minister in the John Howard government. During a dinner speech, Downer, who was from Adelaide invited Kadir to his hometown to watch a game as the Sri Lankans were playing there next. When Kadir’s turn came to respond turning down the offer he said in jest, ‘I don’t want to be the one to tell you that Australia had ‘won by a Hair’.

Kadir was a clever statesman. During the chucking controversy, he had got the entire country behind Murali. Arjuna was given license to literally do whatever he wanted and he was given the assurance that not just the cricket board, but the government would back him to the hilt.

Rather than winning a cricket battle, Kadir had a larger picture in mind. During the height of the civil war, with opinions on the country vastly divided internationally, he wanted to show the world how a Sinhala-Buddhist put his own career under threat to protect a Tamil-Hindu. With the entire team standing behind the only Tamil in the team, a strong message had been sent to the world that the Sinhalese and Tamils can live in harmony. Sadly, Kadir paid a heavy price in the end.

A former President of the Oxford Union, Kadir had a clever sense of humour and total mastery over the English language. Once he described the game with a colourful choice of words.

“In the course of my travels, I have a hard time explaining to the non-cricketing world in America, China, Europe and Russia that a googly is not an Indian sweetmeat; that a square cut is not a choice selection of prime beef; that a cover drive is not a secluded part of the garden; that a bouncer is not a muscular janitor at a night club, that a yorker is not some exotic cocktail mixed in Yorkshire; that a leg-break is not a sinister manoeuvre designed to cripple your opponent’s limbs below the waist.”

Mr. Kadirgamar was a career diplomat and entered politics reluctantly in 1994 and became the Foreign Minister in the Chandrika Kumaratunga government. He was gunned down by the LTTE in 2005. We remember you Sir!