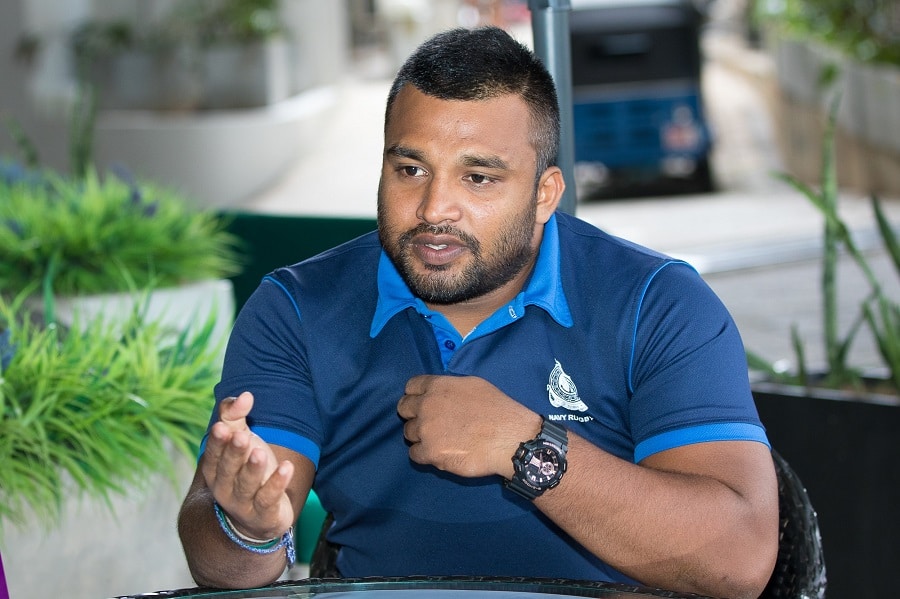 When the school rugby Master-In-Charge asked his school’s 1st XI cricket captain to come play for the school rugby side, he wouldn’t have imagined that the cricketer would fall in love with the oval ball game and evolve to be one of the best in the country.

It was in 2008 that the Wesley Master-In-Charge Mudannayake found Dulanjana Wijesinghe on the cricket field. He had no hesitation to call him up for rugby practices as the Double Blues rugby unit was work in progress at that time and the addition of a mobile yet well-built forward was a treasured inclusion.

“When I was playing cricket, the rugby master in charge Mudannayake sir asked me to come for rugby practice. I didn’t think twice because my good friend Zalik was also on the team”

The tale of the aspiring cricketer turned rugby player, however, starts when Navy offers the schoolboy graduate a professional contract. Making his debut into the professional arena, Dulanjana was soon fast-tracked to be the 1st choice hooker in the team.

Playing for Navy, the dynamic hooker had a huge say when the team went on to lift the Dialog Rugby League in 2014 for the first time.

“It was a great moment. That year we defeated Kandy in Nittawela and later won the Clifford Cup as well.”

Dulanjana doesn’t speak as much about Navy’s title win in 2014 as much as he speaks on the 2015 win against Kandy in Nittawela. Kandy went on to win the League on try difference that year but the 28-year-old still remembers that day like it was yesterday.

“It was in 2015. We had won in Nittawela but we had the foreign players. The final game of the league. We were losing in the 1st half and then we staged a comeback. It was a packed audience in Nittawela. When I was at the line-out I couldn’t hear the calls. But we won the game 13-12 proving everyone wrong. That was the most unforgettable moment.”

When asked where he loves to play, the expected answer is Navy’s home grounds in Welisara but Dulanjana surprisingly picks a different venue.

“Kandy is where I have always loved playing.”

The atmosphere in Kandy, you can’t find it anywhere. The fans will always look at giving you a hard time. Especially during a line out on the ‘Rubber gaha’ side, (Media Box side), the fans are very loud and it’s impossible to hear the calls.”

“But, that motivates me to perform better. Among the Kandy fans, there are fans who actually love the sport and they support us if we play well.”

Nine years later after being drafted by the team from Welisara, Dulanjana still proudly wears the Navy colours, being the team’s most senior campaigner and a true ambassador of Navy rugby. During that nine-year stint, he has had the privilege of donning the national jersey on two occasions for the Asia Division I Championship including the victorious year in 2015.

Playing as a mobile forward, Dulanjana has been giving a tough time to the backs competing in the top try scorer leaderboard in the past three years. Just last year he accumulated a total of 11 tries under his name and later was also adjudged the fan favourite in the country, bagging ThePapare Most Popular Club Rugby Player award as well.

“To captain Sri Lanka in the fifteens will be my ultimate goal. I know it’s a tough task but I am ready to give it a shot”

What makes him a stand out from the rest is his personality. Echoing these sentiments is his first coach, S. W. Chang; “Dulanjana is always a hard worker. That is what is special about him. He is a player who gives his 100%. In this current system, it’s very hard to find such players”.

Giving back to the sport and to the school that taught him the basics of the game, Dulanjana is currently the forwards coach for the Wesley College 1st XV rugby team. He adds that it is “a new challenge to teach the younger generation” and he also will have to learn on the job.

“I have a lot to learn to be a coach. It’s a different view looking from the other side. You learn on the job, even from the players”

In life, there comes a time when one has to make a decision that might decide the fate of their lives. Sometimes it’s a decision one has to take uncertain of its outcome. At 18 years of age when young Dulanjana took that decision to pursue a career in rugby, he wouldn’t have had the slightest idea that he would end up becoming one of the best in the country.

Dulanjana did reminiscence on some tough times during his stint at Navy especially time when his injury kept him out of the game, but it was his will-power that saw him coming through his struggles.

Today, he is Navy’s top player playing in the important hooker position but continues to run and step like a winger.

“As long as I have my feet and my body fit, I will keep playing. Nobody will stop me from doing what I love the most.”