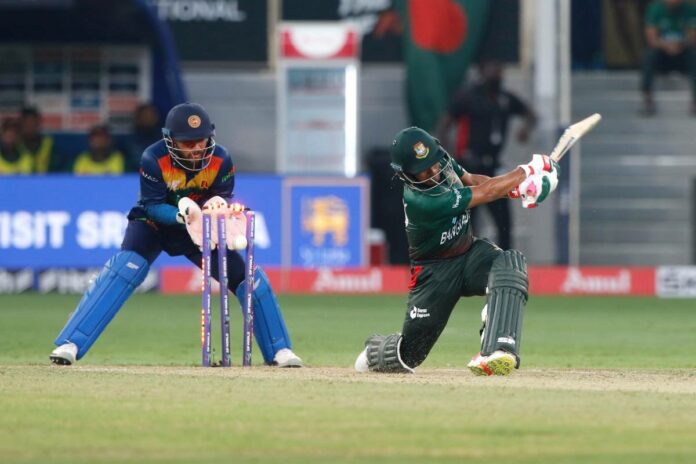 Before a single ball was bowled, the rivalry between the two teams had been heightened almost to fever pitch, courtesy of public utterances from both camps.

Firstly, it was Dasun Shanaka with a pre-emptive strike, he claimed that Bangladesh only had two world class bowlers. Next it was the turn of Bangladesh team manager, Khaled Mahmud, to stoke the fire further by saying that Sri Lanka didn’t have any bowlers of note. And finally, it was the turn of ex-Sri Lankan captain, Mahela Jayawardena to respond and retaliate via social media.

The jibes and counter jibes were really of the school playground variety and each of the individuals making them, should know better. Whether the ratcheting up of the enmity had any significant impact on the players performance is difficult to judge. Shakib tried to play down the impact of the trash talk at the post match press conference, but the glee with which the Sri Lankan players celebrated their victory was over and above what is usually expected.

The roots of the rivalry perhaps extend further back in time but in actual fact, the two teams have met on the field frequently in recent years, across all formats. Sri Lanka have had the better of the last two Test series, despite being perceived as the lesser team in the eyes of Bangladesh supporters. The regularity of their meetings has clearly meant some kind of a rapport has developed between the teams and Shakib was generous in his praise of the opposition at the end of the game.

After a meek display with the bat in their first match against Afghanistan, when they chose to bat first and then limped to 127-7, Bangladesh unveiled a new bolder approach in both selection and batting strategy. Both openers from the Afghanistan match were sidelined, along with Saifuddin who looked short of fitness and form in the earlier outing. Installed in their place were three players with vastly different career trajectories.

Sabbir Rahman, was once upon a time the brave new hope of the team but had seemingly vanished from international cricket in the past few years. His call up seemed more to do with desperation at the lack of other alternatives, rather than any recent form which was screaming out for recognition.

Miraz was playing his first T20I for almost four years, which in itself seems staggering. An automatic pick in the ODI side and perhaps the most versatile Bangladesh spinner with the red ball, his lack of T20I appearances point to a dysfunctional and inconsistent selection policy, particularly given the relatively small talent pool available in Bangladesh. Finally,

Ebadot Hossein was awarded his first T20I cap, which was presumably an admission from the team management that pace holds the key on surfaces away from home.

Miraz and Ebadot had the biggest impact on the game but the mere fact that Bangladesh were prepared to rip up their usual conservative template and start again, should be applauded. Throughout their innings the batters generally showed more intent. Miraz set the pace with 38 from 26 balls and later Afif and Mosaddek showed their worth with vital contributions to lift the score above par. While it wasn’t exactly all out Baz-Ball, the aggressive intent shown by Miraz, Afif and Mosaddek is a good reason for making them central to World Cup plans. BCB president, Nazmul Hassan Papon, can only approve of the “Pap-Ball” moniker.

The Many Lives of Kusal Mendis

When Musfiqur Rahim juggled and then dropped a difficult but very catchable chance from the edge of Kusal’s bat in the second over of the run chase, the burly Sri Lankan opener must have thought the god’s were smiling down on him. Amazingly it was to be the first of four clear let-offs. He was caught behind off a no-ball, Mahedi the offender who was unable to keep his foot behind the line for some unfathomable reason.

Next, the thinnest of edges went undetected by Ebadot the bowler, Mushfiqur the keeper and the other nine fielders. A mildly convincing appeal was turned down by the umpire and the opportunity to review the decision wasn’t taken. A consequence of Bangladesh losing, is the search for scapegoats by the team’s emotional and at times irrational fanbase. And sure enough long before the match had ended, the veteran wicket-keeper and professional scapegoat was being trolled by Bangladesh supporters (and Sri Lankan fans alike).

Another let off was a clear run out chance at the non-strikers end. He had backed up too far and was stranded by the time Sabbir fielded the ball from close in on the legside. It looked easier to hit the stumps than to miss, but a wayward throw signalled another chance that had gone begging. Crucially, Kusul made his luck count, his destructive 60 runs off 37 balls earnt him the player of the match award.

When he finally departed, to a fine Taskin running catch at deep third, it looked like the tide had finally turned against Sri Lanka. They were 131-5, needing a further 53 off 33 balls. The see-saw game still had a couple of twists left before Sri Lanka eventually got over the line.

The Art of Death Bowling (And Managing Bowling Resources)

With three overs left and 34 runs still needed, all of Bangladesh’s front line bowlers had finished their quota of overs. It was a calculated gamble by Shakib to take as many wickets as possible, as quickly as possible, using his most dependable bowlers. It was a gamble that ultimately backfired and essentially cost Bangladesh the game.

Mustafizur has built his reputation on death bowling, but his services couldn’t be called on. Likewise Taskin and the skipper himself were also unavailable to bowl. It fell to Mahedi to bowl the 18th and final over when he was given the forlorn task of defending a paltry 8 runs. But it was the 19th over which was really telling, up until that point Ebadot had picked up two wickets for 34 runs off three overs. Despite picking up another wicket he leaked runs in the penultimate over, 17 of them.

There’s much to like about Ebadot; his back of a length pace and willingness to keep trying. But he is still very much a raw and unpolished gem. Asking him to bowl yorkers or other variations at the death on his T20I debut is the very definition of being thrown in at the deep end. Similarly asking a slow bowler to close out a match might work on surfaces in Bangladesh but in decent batting conditions, against good opposition, the tactic was doomed to fail.

Afterwards Shakib all but admitted his error in managing his bowling resources – most obviously not giving Miraz the ball for at least one more over somewhere in the middle of the innings. Although Sri Lanka were within touching distance of the required rate throughout the middle overs, they weren’t really running away with things. It just goes to show that no matter how many games you’ve played, winning a crunch match in a knock-out tournament requires a monumental amount of strategic and practical ability.