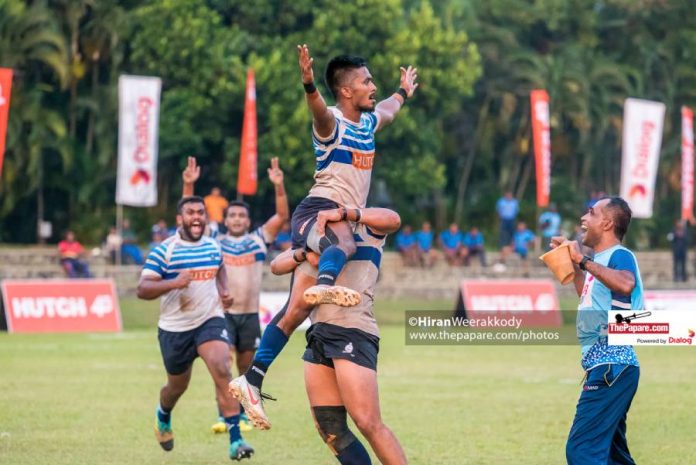 Two consecutive tries in the latter stages of the game saw Navy SC snatch victory from Army at Welisara against Army SC. The scores read 19 points to 7 in favor of the soldiers but Navy held on till the end as they shocked everyone with their last-minute heroics.

Ashan Bandara made a long kick that went out and the restart was a bad one for Army. Nevertheless, they scored in the first 5 minutes as Tomasi Caqusua made an excellent run to score under the post untouched. Sachin Gamage added the extra points. (07-00)

Soon after the restart, Army was back onto their fast-open rugby game. It didn’t take long for Ashan Bandara to find his way past the Navy defence line, but Sachin Gamage made a very costly mistake with the conversion. Had it gone through it would have changed the final result of the whole game. (12-00)

For a moment, it looked as if Army was running with the game when Lahiru Rathnayake scored the 3rd try of the game. Sachin Gamage spotted the overlap and gave a long cut out pass to Rathnayake who finished. This time the try was converted by Gamage. (19-00)

Army was in trouble as their prop forward Niroshan Dileepa was sin-binned. Navy drew first blood as they used their forwards patiently and in close quarters, Radeesha Seneviratne outstretched his hand to plant the ball over the try line. Isuru Kongahawatte made no mistake with the conversion. (19-07)

The play was underdeveloped as neither team was successful in getting the yards and were awarding penalties to each other. However, a penalty won by Thilina Weerasinghe went onto being a try-scoring one for Navy and they won the line out and kept on passing the ball till it reached Sachinka Abeysekara’s hands. Isuru Kongahawatte added the extras.

The second half proved to be a nail biter and the first try of the half came through the individual brilliance of Chathura Seneviratne, who shrugged off 3 players in his 50m dash. Kongahawatte added the 2 points to put Navy in the lead for the very first time in the game. (19-21)

A disastrous phase followed when Amith Gunasinghe was sinned binned, followed by a penalty try and the culprit Charith Silva making his way out to the naughty chair. Army was back in the lead and Navy were down to 13 men. Surprisingly the Navy held their nerve and the scores remained unchanged for a while. (26-21)

The last 10 minutes proved to be one to remember when Sachin Gamage attempted a drop goal which hit to cushion but Thusitha Senanayake managed to score a try from the odd bounce since the ball hadn’t gone beyond the deadline. Army was awarded yet another penalty and went for the 3 points thinking the game was already won. (34-21)

Navy made the comeback of the season when Adeesha Weeratunga scored after some crucial forwards play and with referee Markovitz signaling that there is still time, Kongahawatte added the 2 points quickly and Navy was just a converted try away from a memorable victory. (34-28)

Navy was using every trick in the book to not give away the penalty and keep moving forward. Chathura Seneviratne made another dash, almost to the try line but the Army defense wasn’t willing to give up easily. Finally, it was Thilina Weerasinghe who scored the try. Isuru Kongahawatte who had a 100% success rate to this point had it tough with a single point separating the teams. The crucial conversion was made and Navy celebrated the unlikely win of the season.

Man on the match – Chamath Fernando