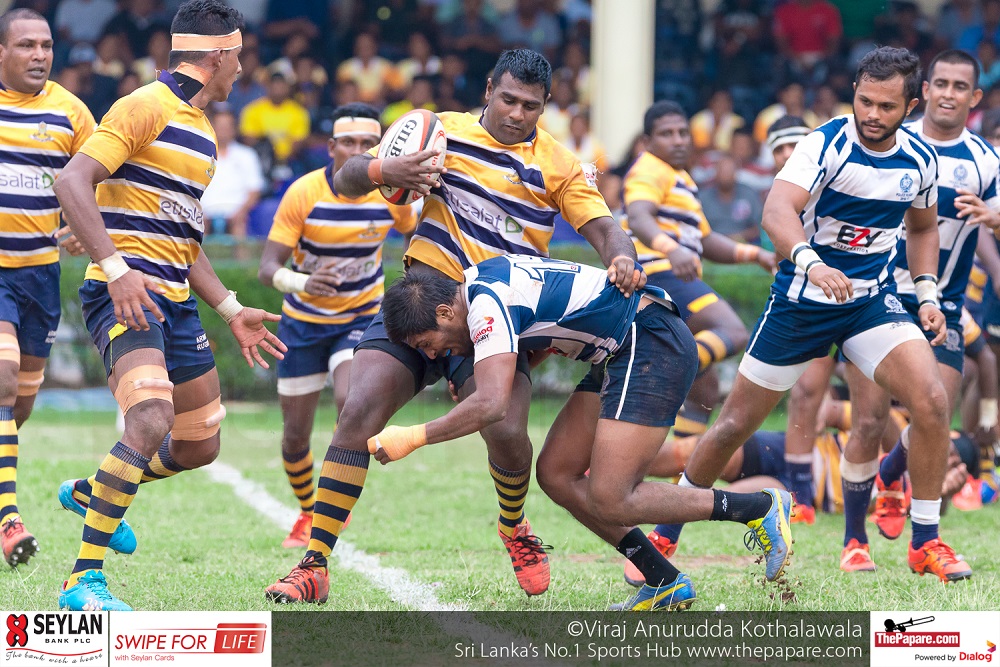 Police SC hosted the unpredictable Army SC in their final round one fixture in the Dialog Rugby League this evening, but came out 2nd best going down by 27 points to 24 in a tight affair. Trailing by 13 points at the break, Police’s 2nd half fight back proved to be in vain as Army held on to finish their round one fixture list with a win.


The weather conditions were cool and breezy making it favourable conditions for open rugby. Army did not have the best of starts with their kick-off not even crossing their own half way line in somewhat of a comical error. Police reacted better to the ground conditions and their determination in penetrating the Army defence earned them an early penalty. However, Rajitha Sansoni’s 30 meter attempt at the posts lacked the power. Instead it was Army who came storming into their opposition’s 22′, which registered the first points of the game through full back Shanaka Kumara’s penalty in the 5th minute of play. (Police 00 – Army 03)

Police SC went ahead in the 13th minute when fly half Rajitha Sansoni made amends for his earlier miss by stepping his way through the Army defence to score his team’s first try of the game. Sansoni converted his own try as Police led 07-03. The visitors lost a bit of impetus in their attacking back division with their full back Shanaka Kumara hobbling off with an ankle injury. Army’s tactics were tinkered a bit with their bustling forwards deciding to take on the Police backs rather going into contact with their opposition counterparts. The ploy started to pay dividends with Army’s prop Pradeep Victor weaving his way through to a “Dan Coles like try” near the left corner flag. Replacement full back Gayan Salinda’s conversion attempt was poor, to say the least, but Army went ahead by a point. (Police 07 –  Army 08)

Army SC’s scrum half M. Rizvi had a fine outing controlling the things from the base. With his forwards making heavy inroads through the Police defence, his smart thinking saw him creep through the back peddling Police defence to score mid-right in the 37th Minute. Gayan Salinda put over the easy conversion as Army led by 8 points. (Police 07 –  Army 15) Army drifted further ahead just before the break when flanker Vinod Kumar fended off his way to the try line to score an unconverted try.

Police SC started the game brightly and were soon asking questions of the Army defence early in the 2nd half. Police soon scored their 2nd try of the game in the 47th minute through winger M. Abzal who managed to receive the ball and cut inside, leaving the Army cover defence in tatters. Rajitha Sansoni’s conversion was on target as Police were right back in the game. 10 minutes later, Sansoni reduced the deficit to just 3 points putting over an easy 22 meter penalty. (Police 17 – Army 20)

Being dominated by the hosts, Army stunned the rejuvenated home support into silence when they put up a few phases together and came crashing into the Police 22′. After a few “pick and goes”, replacement prop Nirosh Dleepa outmuscled his way to the line and scored besides the posts from close range. Salinda added the easy extra points which put the soldiers back in control with 10 minutes remaining. (Police 17 –  Army 27)

From then onwards, Police looked out of sorts making careless errors that gave away position to their doughty opponents. However a sudden break by the no. 8 Radeesha Senevirathne saw them bring play in their own 22′. The Police forwards kept barging their way through gaining good ground but Army managed to hold on desperately. The pressure was starting to take its toll and with Army conceding three back to back penalties in the red zone, the referee Dinka Peiris had no option but to award a penalty try to the home team. Sansoni added the extras and with that Police were handed a lifeline to salvage the game .(Police 24 – Army 27)

With time almost up, Police had one final chance when they were awarded an attacking scrum inside the Army 22′. The ball was sent out wide but Police SC’s center Chula Susantha opted to kick ahead rather than run with the ball which only found touch. That error of judgement was enough for Army to cross the finish line by 3 points.