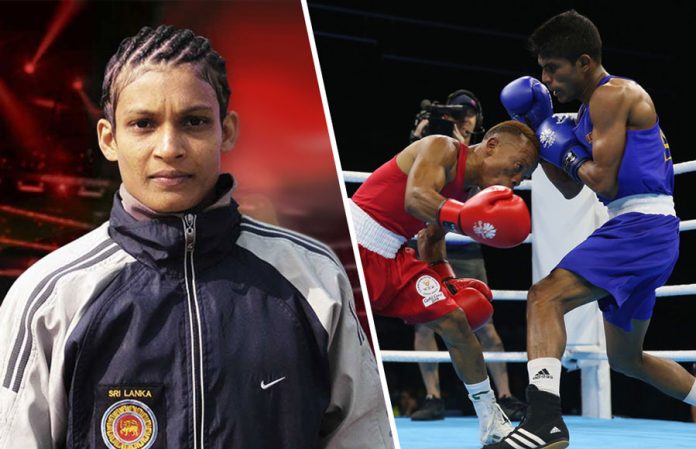 Anusha Kodithuwakku defeated Brandy Barnes in the quarter-finals of the women’s 45-48kg boxing category in Oxenford Studios at the Gold Coast 2018 Commonwealth Games.

The 21-year old Barnes was no match for the veteran Kodithuwakku, who is 18 years her senior, as the contest only lasted 2.59mins in the 1st round. Kodithuwakku knocked down the Cayman Islands girl twice in the opening round as referee Valeri Pasthuov stopped the contest awarding the victory to the Sri Lankan.

Already secured of a Bronze Medal, Kodithuwakku will face rival MC Mary Kom, who defeated Megan Gordon in five rounds, in the semi-final with ambitions of making it to the final.

It will be an uphill task as India’s Mary Kom, who has won five World Amateur Championship Gold medals as well as five medals in Asian Championships, a bronze in 2012 Olympics, a gold medal in Asian Games, will be chasing a Commonwealth Games medal which eluded her in 2014.

The two met in the 2016 South Asian Games final of the flyweight category, where Kodithuwakku suffered a knee injury during the bout and had to forfeit.

In the Men’s light-fly weight (46-49kg) category, Sri Lanka’s Thiwanka Ranasinghe defeated Mphongoshi Siyabulela of South Africa on points in the round of 16 and qualified for the quarter-finals.

Ranasinghe, a product of Vidyartha College Kandy, had 29-27 decisions from four judges at the end of the three rounds while the fifth judge had a 28-28 tie.

In the Men’s 64kg category, Sri Lanka’s Dinidu Saparamadu defeated Richard Hadlow of New Zealand on points in the round of 16 and qualified for the quarter-finals.