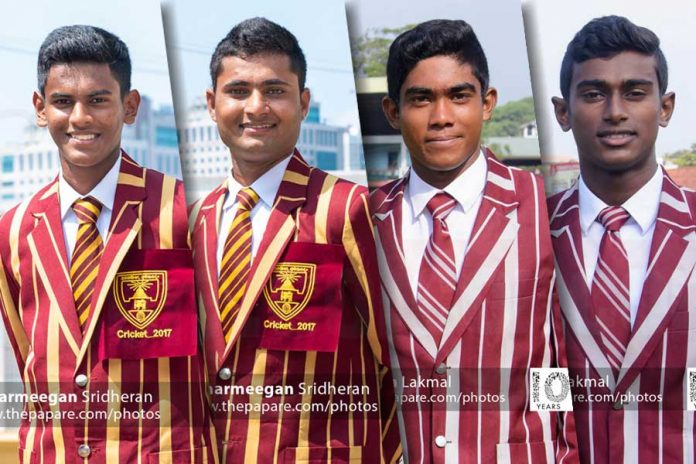 90th Battle of the Maroons will hit the roads on the 2nd and 3rd of March this year painting Maitland Place in Maroon.

This prestigious encounter was first played back in 1924 which ended in a draw. Since then 18 games produced results out of the 89 encounters. Ananda College is housing the ‘Dr. N M Perera Memorial Challenge Trophy’ since their win in 2003 under Daminda Kularatne which was the last time a result was seen. Nalanda College is fighting to end the 66-year long drought as their last win dates back to 1953.

One-Test-Wonder, Shantha Kalavitagoda holds the honour of being the highest run-scorer in an innings of an Ananda-Nalanda big match. The Nalandian scored an unbeaten 149 runs while leading his team in the year 1997. Most by an Anandian is the 144 runs scored by Thilina Kandamby in the year 1999. He stands thirds in the list behind Roshan Mahanama who scored 146 runs during his time. Kandamby is also the highest runs scorer in a match of a battle of the maroons.

The best bowling figures recorded in a battle of the maroons is by Nalandian Yohan Gunasekara who bagged 8 wickets for 32 runs in 1976. The best by an Anandian is the eight-fer of P.W. Perera back in 1940.

The match-bag of 14 wickets for 67 runs by Nalandian, Anura Ranasinghe, remains the best in the battle while P.W. de Silva is Anandian and only other player to wrap a match-bag 10 wicket-haul.

Ananda outfit will be led by the latest centurion in an Ananda-Nalanda battle, Kamesh Nirmal. Co-incidentally, it was his brother, Sri Lanka captain, Dinesh Chandimal, who scored a century for Ananda before him. Nirmal is a right-handed wicket-keeper-batsman and has been a consistent performer at the top-order for Ananda. He has scored over 1000 runs this season.

Supporting him with the bat will be the young but experienced opener, Kanishka Ranthilakage, experienced fresher, Kalana Wijesiri and the middle order batsman, Daminda Reshan.

Already a coloursman, left-handed Ranthilakage has scored over 800 runs this season and has been a huge prospect for Ananda. Wijesiri is a technically solid right-hander who has supported the team with over 600 runs this season. Reshan can be the X-factor player with his all-round abilities. He provides vital knocks down the order, most of which being at pressure situations following a collapse.

Vice-captain, Chamika Gunasekara will be in-charge of the bowling for Ananda. Though his numbers aren’t promising he will definitely be valuable with the new ball with genuine pace and bounce.

Right-arm leg-spinner Janidu Jayawardena and off-spinner Saviru Bandara have been the main wicket-taking option for Ananda College as the former has captured 41 scalps while the latter 33 wickets to his name.

Nalanda skipper, Lakshitha Manasinghe, has been in sublime form this season with 1117 runs at an average of 62.1 with 5 centuries and 4 fifties. He was also outstanding with the ball as the off-spinner leads the wicket-takers list for Nalanda with 70 wickets this season.

Opener, Avishka Perera also had an exciting season with two enterprising tons to his merits and over 700 runs. The batting unit is further strengthened by Ranindu de Silva and wicket-keeper Dilhara Polgampola. Both of them have scored over 400 runs this season,

Apart from Manasinghe, the left-arm seamer Dineth Samaraweera looks impressive with his ability to swing the ball either way. But, the wicket-taking options have been the Sri Lanka youth cap, Chamindu Wijesinghe and the left-arm spinner Kaveesha Madurapperuma.

Both teams are led by two fighting cricketers and past big match centurions. Manasinghe has scored a century and a half-century in his two appearances whilst Nirmal has a ton under his belt. It suggests that these two will be players to look out for. They will deliver in the big games.

Apart from that, Nalanda College has a slight edge with 3 national coloursmen in the playing XI and a splendid season to vouch for their confidence. Manasinghe will play a pivotal role if the game is to produce a result. Chamindu Wijesinghe and Raveen de Silva will be exciting to watch as their all-round expertise shall unfold to uplift Nalanda.

On the other hand, the expectations are low from the Anandians, which itself is a huge plus for the team. The team has got into a winning mentality towards the latter part of the season and will definitely be underdogs in the big game. After all, it is about how well they do on the day that matters.

Watch Live Action on Dialog Television Channel No.1, MyTV, and ThePapare.com from 9.00am onwards.