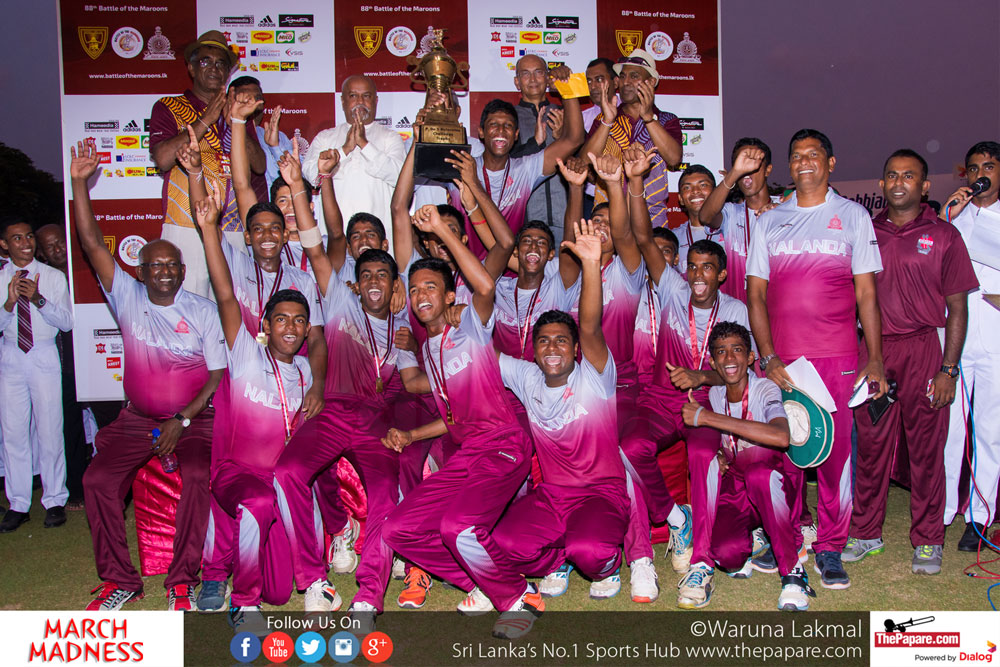 Kasun Sandaruwan’s unbeaten half century guided Nalanda College to an exciting 2 wicket victory over their rivals Ananda College in the 43rd Battle of the Maroons limited overs encounter at SSC grounds.


Ananda College skipper Kavishka Anjula won the toss and elected to bat first. They started off in a horrific fashion by losing two wickets for just 25 runs. Opening batsman Kavindu Gimhan and Sammu Ashan got together and added 56 runs for the third wicket with Kavindu Gimhan scoring 31 runs.

After the dismissal of  Kavindu, Sammu was joined by Asel Sigera. The pair added 103 runs for the fourth wicket and most importantly those runs came in just 132 balls. Asel played second fiddle to Sammu throughout but just as they were looking cut loose, Asel lost his wicket for 42.

Nalanda College went on to take the big wicket of Sammu Ashan in the 41st over, getting two new batsmen to the crease. Sammu was however the pick of the batters with a brilliant 96 off just 107 balls. His knock included 8 boundaries and 4 maximums.

After those two quick wickets, Ananda needed a cameo from one of their late middle order batsmen. They found it from theirskipper Kavishka Anjula who came in and scored a brisk 38 to push his side over the 250 mark. Ananda College managed to post 257 in their allocated 50 overs. With the ball for Nalanda, Kalana Perera, Malinga Amarasinghe and Asel Kulatunga shared 2 wickets each.

In the run chase, Nalanda got off to a flying start with a 64 run stand for the first wicket. Skipper Dasun Senevirathne took apart the Anandian bowling attack by scoring a brisk 32 with 7 boundaries. He got good support from Avishka Perera who scored 25 runs.

Nalanda however lost both their openers with the score standing at 78 but their middle order made sure they were on par with the required run rate. Number 3 batsman Malinga Amarasinghe was the anchor of the innings for Nalanda as he controlled it perfectly. His knock of 67 runs got them closer to the target but it was not done yet.

Ananda College came back into the game after the dismissal of Malinga by taking wickets at regular intervals. But one man stood between victory and defeat for Ananda College. That man was Kasun Sandaruwan.

Kasun looked nervous early on, but after the loss of Malinga he took the responsibility to his shoulders and marched on. The game went right down to the wire and Nalanda needed 6 runs from the final over. It narrowed down to 2 runs off the final ball with Kasun on strike. Sammu Ashan was the bowler and the last ball was missed by Kasun trying to slog it over. But luckily for Nalanda, the Anandian wicket keeper missed the ball and it deflected off his pads letting Kasun run two and clinch the win.

Dananjaya 5-for on debut takes Sri Lanka to series win

Battle of the Saints – Comedy edition ft. Gehan Blok and...