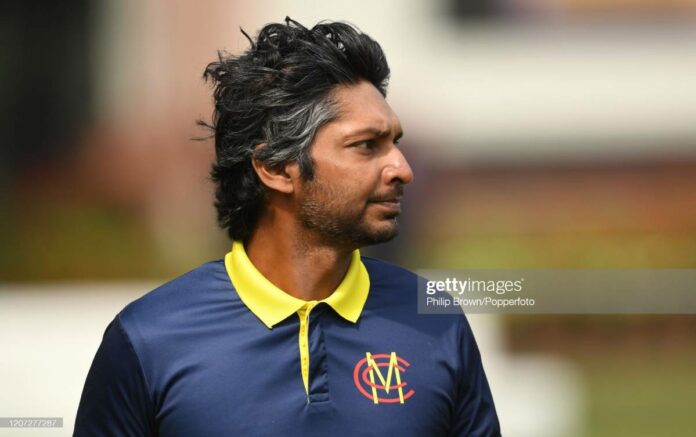 On the eve of Sri Lanka’s ODI at London’s Oval, ThePapare.com’s UK correspondent, Tawhid Qureshi caught up with Kumar Sangakkara at a small charity event.

Erudite, urbane and faultlessly articulate. It’s not a description that can be applied to most modern-day international cricketers, but Kumar Sangakkara has never been just a run of the mill cricketer, either in his playing days or in his retirement from the game. Over the course of an hour, his unique wisdom coupled with a dry sense of humour, mesmerised a small crowd on the newly built Lock Balcony at the Oval. The event was organised by the Surrey Cricket Foundation, the charitable arm of Surrey Cricket Club, to raise funds for the various good causes which aim to increase cricket participation in Surrey, particularly for those who face disadvantage.

The Question and Answer session was compered by Aatif Nawaz, a comedian by trade who has rapidly become one of the most engaging voices on BBC radio’s Test Match Special. His gentle mischievous manner created the space for Sangakkara to share various insights and anecdotes. He began by describing how he took up cricket relatively late in his youth, when he realised his interest in badminton wouldn’t bring him universal acclaim. From the stories of his youth, Sangakkara’s respect and at times playfully begrudging admiration for his father was apparent, he was clearly central to his success in becoming a world class cricketer. His father’s instruction to “acquire knowledge rather than education” was one of many memorable quotes from the evening.

Despite London now being a second home for Sangakkara, he recalled how he “hated” touring England in the early part of his career. The green pitches, the swinging dukes ball and lousy weather all played a part in this. It wasn’t until later in his career, when he was joined by his wife and family, that touring England became a genuine pleasure. London in particular has beguiled Sangakarra, as it has done for countless others. There’s no doubt that the years he spent living in the city when playing for Surrey, allowed him to explore the cosmopolitan nature of London and the endless possibilities it offers.

And yet when he first joined Surrey in 2015 he wasn’t sure if he would like his teammates. Although he was familiar with Surrey stalwarts such as Alec Stewart and Gareth Batty, Sangakkara remembered how the popular view among other Counties was that Surrey players were “arrogant” and generally disliked. It was a view in all probability based on the envy which surrounds any successful wealthy sports club, and for Sangakkara it was totally unfounded. There’s a genuine love for Surrey when Sangakkara talks about the “Surrey family” bond and the former teammates who have become lifelong friends. He’s still part of the Surrey team WhatsApp group and joked that receiving messages in the middle of the night, due to the time difference between the UK and Sri Lanka, was one of the downsides.

It was impossible to ignore the subject of despondency and despair surrounding the current state of Sri Lankan cricket, performances on the current tour of England has only reinforced the sense of a downward spiral being navigated. But rather than stick the knife in, Sangakkara chose his words carefully and didn’t point the finger at the current set of players, they were merely the product of a “bad system”. Perhaps the most valuable advice of the evening, was when Sangakkara indirectly addressed the issue of player indiscipline. He urged today’s cricketers to have an identity that wasn’t “defined by their skill” and advocated that growing as a person was a vitally important part of a cricketer’s career. That’s not to say that Sangakkara came across as a total puritan. He suggested that in his playing days the post-match debrief in the hotel bar was a vital part of team bonding and a chance to understand teammates on a human level.

Sangakkara recounted how his characteristic cool was challenged when he agreed to deliver the MCC Spirit of Cricket lecture. A few shots of sake were needed to calm his nerves. The lecture itself was an overwhelming success and a glimpse into his post playing career. He reiterated the core message of the lecture, that cricket could be used to overcome differences, stemming from language, religion or ethnicity. It’s a broad aspiration of the MCC itself, and so becoming the first non-British president of the most English of institutions, was perhaps only a matter of time. His role as MCC president is obviously a hands-on role rather than ceremonial, he has devoted much time and energy to it – he was in fact late to the Oval event due to an overrunning MCC committee meeting. It’s certain that the administration of the global game would only benefit from Sangakkara’s direct involvement in it, but he was coy when the prospect of an ICC role was suggested.

When he was asked how he would like to be remembered in the year 3000, Sangakkara’s answer was revealing. Although he was acutely aware of the high esteem given to him by fans, it was only his family and their view of him which really mattered. His lack of sentimentality and generosity was highlighted when he disclosed how most of his medals and trophies were given away to the Sri Lanka team helper. He still “cringes” when he sees his mother’s memorabilia collection whenever he returns to his parents Kandy house. Living life in the present is the most important thing for him. But any notion of being hardnosed and detached were tossed side when he reminisced about using a bat sticker with the incorrect spelling of his name, purely because he didn’t want to upset or inconvenience his bat sponsor.

If Sangakkara’s utterances lasted another hour, the crowd would still have been totally engrossed but just as path of the dipping sun could almost be traced behind the thick clouds, he left the stage. Graciously he posed with every person who requested a selfie, before slipping away. Everyone present had been enriched by the experience of listening to one of the modern greats of the game. I’m certain that whatever he chooses to do next, the complex, intelligent and prescient mind of Kumar Sangakkara will continue to enthral, perhaps even more than his dazzling stroke play ever did.

Embuldeniya gets big breakthrough at the stroke of Lunch